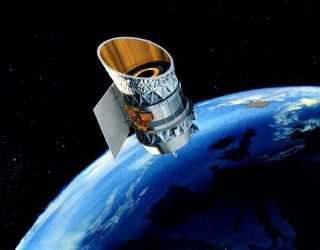 Satellite operators, and everyone else who wants a safe and sustainable space environment, dodged a bullet Wednesday evening (Jan. 29).

Two defunct satellites — the Infrared Astronomical Satellite (IRAS) and the Gravity Gradient Stabilization Experiment (GGSE-4) — cruised safely past each other high in the skies above Pittsburgh.

The near miss of space junk, which occurred at 6:39 p.m. EST (2339 GMT), was expected; various analyses over the past few days by California-based tracking company LeoLabs had pegged the chance of a collision at just 0.1% to 5%. NASA officials told Space.com that the U.S. military's 18th Space Control Squadron, which tracks space debris and satellites, estimated just a 0.07% chance of a collision. (LeoLabs' final pre-conjunction calculation estimated a close-approach distance of 154 feet, or 47 meters).

"We are pleased to report that in the first several radar passes of the two objects after the close approach, we see no evidence of new debris. This event has served to highlight the collision risks caused by derelict satellites in LEO [low Earth orbit]," LeoLabs representatives said via Twitter on Wednesday night.

Video: Watch how close IRAS and GGSE-4 satellites will get

We are pleased to report that in the first several radar passes of the two objects after the close approach, we see no evidence of new debris. This event has served to highlight the collision risks caused by derelict satellites in LEO.January 30, 2020

But a smashup was possible, and it could have been very bad indeed. The nearly 2,400-lb. (1,090 kilograms) IRAS and the 190-lb. (85 kg) GGSE-4 are both traveling very fast, and a collision would likely have generated hundreds of pieces of debris, said Jonathan McDowell, an astronomer at the Harvard-Smithsonian Center for Astrophysics who keeps tabs on many of the objects circling Earth using publicly available U.S. tracking data.

Most of that debris would have stayed in IRAS' orbit, a sun-synchronous path favored by many weather and spy satellites. And IRAS' neck of the cosmic woods is similar to that once inhabited by a weather satellite that China destroyed during a notorious, oft-criticized 2007 test.

"So, there's already a lot of debris in that orbit," McDowell told Space.com before Wednesday night's close approach. "Adding more would not be good."

There will doubtless be many more close calls in the coming years; space is getting more and more crowded, after all. There are multiple reasons for this, including the decline in the cost of constructing and launching satellites and the building out of internet megaconstellations, such as SpaceX's Starlink network.

So, space junk trackers such as LeoLabs and the U.S. Air Force will be increasingly busy for the foreseeable future.

"There's a whole lot of good economic development, new satellites going into space, but they're faced with a debris problem that already exists," LeoLabs CEO and co-founder Dan Ceperley told Space.com on Wednesday morning. "This is a problem that — we really need to prevent its growth. We can't really clean it up afterwards."

IRAS, a collaboration among NASA, the Netherlands and the United Kingdom, launched in January 1983 and studied the cosmos in infrared light for 10 months. GGSE-4 operated from 1967 through 1972. It was a U.S. National Reconnaissance Office satellite designed to collect signals intelligence, McDowell said. And GGSE-4 was a cover name; the craft's real moniker was POPPY 5B, according to McDowell.