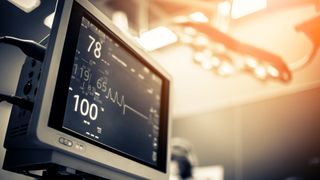 Heartbeat rhythms are as unique as fingerprints, and lasers can identify their signature beats.
(Image: © Shutterstock)

The U.S. military could soon spot you in a crowd — not by your face or your gait, but by your unique heartbeat rhythm. The Pentagon recently developed and tested a laser that can scan and distinguish the pitter-patter of your heart from up to 650 feet (200 meters) away.

Dubbed "Jetson," the name recalls the popular sci-fi cartoon family the Jetsons, who inhabited a world full of futuristic gadgets. But unlike the handy household devices from the show, the new laser system was built for combatting terrorism, and was created by the Pentagon at the request of the U.S. Special Forces, MIT Technology Review (MTR) reported.

And unlike some types of identification techniques that rely on biometrics (unique anatomical or behavioral traits), the subjects of Jetson's heartbeat-detecting infrared laser can be far away from the scanner. The laser can even sense heartbeats through clothing, according to MTR.

Retina shape and fingerprints have long been recognized as biomarkers that are individually unique and can be used for identification. Over the past decade, technologies have emerged that can detect even more biomarkers, such as vein patterns and body odor, as well as heartbeats.

For example, the Nymi wristband authenticates a wearer by their heartbeat and then sends that verification to smart devices via Bluetooth, Live Science previously reported.

Jetson reads heartbeats from a distance through vibrometry, a contact-free technique that measures the vibration of a surface. Algorithms then translate patterns in a heartbeat into a unique cardiac signature, according to MTR.

However, the present version of Jetson requires 30 seconds to conduct scans and gather heartbeat data — a limitation that somewhat hampers the technology's usefulness when people are moving, MTR reported.

Other types of long-range biometric identification, such as facial recognition, can be derailed if faces are even partially obscured. In contrast, cardiac patterns are difficult for an individual to change deliberately. Scanning heartbeats from a distance therefore "provides additional biometric identification when environmental conditions and changes in facial appearance hinder the use of more common facial recognition systems," according to a 2018 report by the Combating Terrorism Technical Support Office (CTTSO) describing Jetson and other novel technologies developed for the U.S. Department of Defense.