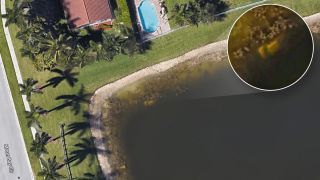 While using Google Earth, a former resident of this Wellington, Florida, home discovered what appeared to be a submerged car in a pond behind the house.
(Image: © Google Earth)

Google Earth recently provided a gruesome conclusion to the mystery of a man who disappeared 22 years ago. His skeletal remains were found inside a car that spent the past two decades underwater, in a pond behind a home in Wellington, Florida.

A former resident of the suburban neighborhood was using Google Earth to scan the area where he used to live, when he spotted what appeared to be a submerged vehicle, representatives with the Palm Beach County Sheriff's Office said in a statement posted to Facebook on Sept. 12.

The Google Earth user then contacted the current owner of the home, who flew a camera-toting drone over the pond to take a closer look at the sunken object. He confirmed that there was indeed a car in his pond, and he reached out to the local sheriff's office; when the police removed the car from the water and opened it up, "skeletal remains were found inside," according to the statement.

Related: 15 Secretive Places You Can Now See on Google Earth (And 3 You Can't)

The car, still visible on Google Maps, was found in a retention pond, an artificial body of water built to store runoff from heavy rains. Thick calcium deposits coated the exterior of the car — a white 1994 Saturn SL — hinting that it had spent a long time in the water, the South Florida Sun-Sentinel reported.

Experts with the Medical Examiner's Office examined the bones, and on Sept. 10 they identified the remains as William Moldt. Moldt was 40 years old when he was declared missing on Nov. 8, 1997; he had phoned his girlfriend at around 9:30 p.m. that night and was last seen leaving a local bar at 11 p.m., WPTV reported.

A missing-persons website described Moldt as having brown eyes, standing 6 feet (2 meters) tall and weighing 225 lbs. (102 kilograms), according to the Sun-Sentinel. At the time of Moldt's disappearance, the development was still under construction, but the circumstances that led to the man — and his car — ending up in the pond remain unknown, said WPTV.