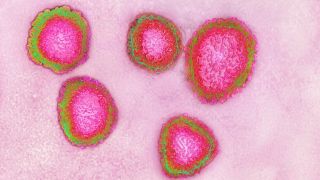 A 55-year-old individual from Hubei province in China may have been the first person to have contracted COVID-19, the disease caused by the new coronavirus spreading across the globe. That case dates back to Nov. 17, 2019, according to the South Morning China Post.

That's more than a month earlier than doctors noted cases in Wuhan, China, which is in Hubei province, at the end of December 2019. At the time, authorities suspected the virus stemmed from something sold at a wet market in the city. However, it's now clear that early in what is now a pandemic, some infected people had no connection to the market. That included one of the earliest cases from Dec. 1, 2019 in an individual who had no link to that seafood market, researchers reported Jan. 20 in the journal The Lancet.

Scientists now suspect this coronavirus, SARS-CoV-2, originated in a bat and somehow hopped to another animal, possibly the pangolin, which then passed it on to humans. The disease is now spreading between people without any animal intermediary.

Now, doctors and scientists are trying to trace the virus back to where it originated to learn more about its spread. If, for instance, doctors can find the earliest cases, they may be able to identify the animal host where the virus lurks.

They found that following the Nov. 17 case, about one to five new cases were reported every day and by Dec. 15, the total infections reached 27. Daily cases seem to have increased after that, with the case count reaching 60 by Dec. 20, the SCMP reported.

On Dec. 27, Dr. Zhang Jixian, head of the respiratory department at Hubei Provincial Hospital, reported to health officials in China that a novel coronavirus was causing the disease; by that day, it had infected more than 180 individuals. (Doctors may not have been aware of all of those cases at the time, but only identified those cases after going back over the records, the Morning Post reported.)

Even with this Nov. 17 case identified, doctors can't be certain the individual is "patient zero," or the very first individual to have been infected with SARS-CoV-2, and there's a chance even earlier cases will be found, the SCMP reported.

As of March 13, there were nearly 148,000 cases globally and more than 81,000 cases in mainland China, with cases on every continent except Antarctica. Scientists are continuing to study the virus and work on treatments, including a vaccine. A clinical trial of such a vaccine has already started recruiting volunteers in Seattle, Live Science reported.