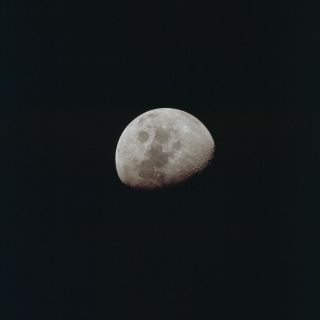 A photo of the moon taken after trans-Earth insertion when the Apollo 10 spacecraft was high above the lunar equator.
(Image: © NASA/Johnson Space Center)

The moon is our constant companion and Earth's only consistent natural satellite. It has a diameter of about 2,159 miles (3,475 kilometers), making it bigger than the dwarf planet Pluto. The moon is one-fourth our planet's size but has a lower density, meaning that gravity is only 0.17 times as strong on the moon as it is on the surface of Earth.

How did the moon form?

The leading theory for the moon's formation suggests that it came into existence roughly 4.5 billion years ago, not long after the solar system was born, which occurred about 95 million years earlier. Many enormous space rocks were flying around our local interplanetary neighborhood at that time. Around then, astronomers hypothesize, the early Earth was struck by a Mars-size body dubbed Theia. The crash would have largely melted our world and likely blew off our atmosphere, as well as material that formed the moon.

Some astronomers have proposed tweaks to this hypothesis, such as the possibility that proto-Earth was turned into a doughnut of molten rock called a synestia after Theia vaporized our planet. As the space doughnut re-cooled, material at its outer edges coalesced into small "moonlets" and eventually the moon itself. An even stranger theory suggests that Earth's gravitational pull allowed it to steal the moon from early Venus.

Whatever its origin story, the moon has been with us throughout human history, gaining names in ancient languages. The Latin word for our satellite is Luna — the English word "lunar" is derived from it. In Greek, Selene is the name of a mythical moon goddess, giving us the word "selenology," or the study of the moon's geology.

How far is the moon from Earth?

The moon looms large in the sky, the second brightest object after the sun. It gains its light from the sun, which reflects light off its surface toward Earth. The moon orbits an average of 238,855 miles (384,400 km) from our planet — a close enough distance that gravitational forces have tidally locked it to Earth, meaning the same side always faces us, according to NASA.

Such tidal interactions also have consequences for our planet's oceans, which are tugged by the moon's gravity to regularly rise and fall in sequences we call tides. High tide occurs on the side of Earth nearest the moon's gravitational pull, while simultaneously happening on our planet's other side due to the inertia of water. Low tides occur at times between these two points.

Large, dark features can be seen on the moon's face. These are known as "maria," or seas in Latin, since they were once believed to be bodies of water. Today, researchers know these areas were carved from the moon's crust billions of years ago when lava flowed over the lunar surface.

Craters also pockmark the moon's face, the result of billions of years of getting pummeled by various space objects. Because the moon has almost no atmosphere or active plate tectonics, erosion can't erase these scars, which remain long after the event that formed them. On the lunar far side is the South Pole-Aitken Basin — an impact hole 1,550 miles (2,500 km) wide and 8 miles (13 km) deep that is among the oldest and deepest of the moon's many blemishes. Scientists are still scratching their heads over how it formed.

Trace amounts of water are believed to exist in dark regions at its poles, which could be mined during future exploration efforts.

An extremely thin atmosphere of gas blankets the moon, consisting of only 100 molecules per cubic centimeter. In comparison, the Earth's atmosphere at sea level has around a billion billion times more molecules per cubic centimeter. The total mass of all lunar gases is about 55,000 lbs. (25,000 kilograms) — about the same weight as a loaded dump truck.

The moon's atmosphere is known to contain argon-40, helium-4, oxygen, methane, nitrogen, carbon monoxide, carbon dioxide, sodium, potassium, radon, polonium and even tiny amounts of water. Some of these elements came from outgassing as the moon cooled. Others were delivered by comets.

Moon dust is made from extremely sharp and tiny pieces of volcanic glass that have been smashed out of the lunar soil by micrometeorites. The thin lunar atmosphere means these fragments hardly ever erode and so dust on the moon is caustic, clogging the equipment and zippers Apollo astronauts brought to the moon, as well as probably being rather toxic for human health.

With the moon so close, it has been a major target of human exploration efforts since the beginning of the Space Age and remains the only body besides Earth that humans have set foot upon. NASA's historic Apollo program first brought astronauts to the lunar surface on July 20, 1969, winning the space race for the United States.

Instruments placed on the moon during Apollo have given scientists great amounts of data, informing them, for instance, that the moon is moving away from Earth by about 1.5 inches (3.8 centimeters) per year and that numerous moonquakes originate from cliff-like cracks on the lunar surface. Apollo astronauts also brought back 842 lbs. (382 kg) of moon rocks with them, according to NASA, samples of which are still being studied and yielding new insights to this day.

Russian and Chinese probes have also landed on the moon, while the Japanese, Chinese, Russian and Indian space agencies have orbited spacecraft around it. Recently, both India and Israel have tried to place landers on the moon's surface, but both attempts ended in failure. NASA has renewed its interest in the moon once again with its Artemis program, which seeks to place astronauts on its surface by 2024, and use our satellite as a launching point to Mars.