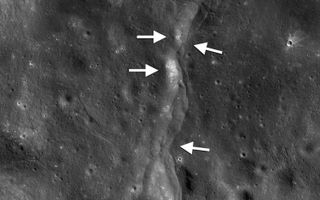 The moon is shrinking. And as the crust of our lone satellite contracts, it tugs on cliff-like cracks on the surface, leading to lots of moonquakes, scientists just discovered.

The study researchers recently revisited moonquake data gathered by seismic equipment on the Apollo lunar missions, from 1969 to 1977. They examined moonquakes that occurred at shallow depths, using new algorithms to pinpoint where the moonquakes came from, according to a new study.

Then, the scientists mapped the seismic data to satellite images of thrust faults, or scarps — stairstep cliffs on the lunar surface. These formations stand dozens of feet high and extend for miles, and they are visible in images captured by NASA's Lunar Reconnaissance Orbiter (LRO).

The researchers discovered that around 25% of the moonquakes were likely generated by released energy from these faults, rather than by asteroid impacts or activity deep inside the moon, the scientists reported. [Top 10 Amazing Moon Facts]

Scarps are spread across the face of the moon in a vast, global network, and are estimated to be no more than 50 million years old, the researchers wrote. The age and distribution of scarps hints that they appeared as the moon's interior cooled down, causing its crust to contract. But the researchers wondered if scarps played a more active role in lunar tectonics.

For the study, the scientists looked at readings gathered by four Apollo mission seismometers, examining 28 moonquakes that would have registered between magnitude 2 and 5 on Earth. They used new algorithms to estimate the quakes' epicenters, and compared those coordinates to scarp locations in LRO images, according to the study.

Eight of the moonquakes fell within 19 miles (31 kilometers) of a thrust fault, close enough to identify the fault as the quake's source. For six of those quakes, the moon was in or near apogee — the orbital point farthest from Earth. During apogee, additional gravitational stresses exert extra pull on the moon's crust and on the thrust faults, increasing the likelihood of triggering a moonquake, the scientists wrote.

Evidence in LRO photos also suggested that lunar shrinkage is still happening, dragging on the scarps and launching fresh moonquakes.

Some LRO images showed fresh tracks from tumbled boulders and landslides near thrust faults. Brighter spots exposed by the disturbances hinted that the activity was recent and that the faults remain active, likely because the moon continues to contract, the study authors reported.

"You don't often get to see active tectonics anywhere but Earth, so it's very exciting to think these faults may still be producing moonquakes," study co-author Nicholas Schmerr, an assistant professor of geology at the University of Maryland, said in a statement.

Though there is still much to be discovered from the Apollo data, these and other tantalizing findings emphasize the importance of visiting the moon again, Schmerr added.

"We learned a lot from the Apollo missions, but they really only scratched the surface. With a larger network of modern seismometers, we could make huge strides in our understanding of the moon's geology. This provides some very promising low-hanging fruit for science on a future mission to the moon," he said.

The findings were published online yesterday (May 13) in the journal Nature Geoscience.