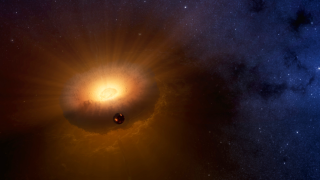 This artist's rendering shows the hot, molten moon emerging from a synestia, a giant spinning doughnut of vaporized rock that formed when planet-size objects collided.
(Image: © Sarah Stewart/UC Davis based on NASA rendering)

Once upon a time, about 4.5 billion years ago, the Earth was an unformed doughnut of molten rock called a synestia — and the moon was hidden in the filling.

That's one possible explanation for the moon's formation, anyway. And according to a new paper published today (Feb. 28) in the Journal of Geophysical Research – Planets, it may be the best explanation scientists have so far.

"The new work explains features of the moon that are hard to resolve with current ideas," study author Sarah Stewart, a professor of Earth and planetary sciences at the University of California, Davis, said in a statement. "The moon is chemically almost the same as the Earth, but with some differences. This is the first model that can match the pattern of the Moon's composition." [10 Amazing Moon Facts]

The new lunar-creation model revolves around a hypothetical planetary object called a synestia, which Stewart and Simon Lock, a graduate student at Harvard University and co-author of the new study, first described in a paper published last year.

Named for the Greek words "syn," meaning together, and "Hestia," the goddess of structures and architecture, a synestia may form when two planet-size bodies collide in space, with the collision resulting in a cloud of superhot vapor.

If the two objects have great enough angular momentum (as most rotating planets do), the resulting storm of planetary debris could continue spinning fast enough to form a giant disc of molten vapor, indented in the center and puffing steadily outward in a giant doughnut shape many times wider than Saturn's rings.

As this giant, spinning space-doughnut gradually loses heat, it condenses into a solid again, combining bits of matter from both the original planet and the object it collided with.

According to Stewart and Lock's previous paper, Earth may have briefly become a synestia not long after its birth about 4.5 billion years ago, after being struck by a renegade Mars-size rock called Theia. A popular theory of the moon's origin suggests that Earth took a glancing blow from Theia, throwing a spray of molten rock and metal into orbit that eventually condensed into the moon as we know it today.

If the moon formed inside an Earth-synestia, however, a slightly different story would have unfolded.

"Our model starts with a collision that forms a synestia," Lock said in a statement. "The moon forms inside the vaporized Earth at temperatures of 4,000 to 6,000 degrees Fahrenheit [2,200 to 3300 degrees Celsius] and pressures of tens of atmospheres," or many times higher than the atmospheric pressure on modern-day Earth.

As the synestia first started to cool, vaporized rock at the outer edge of the system began condensing into droplets and falling inward in a "torrential rain." As these droplets fell farther into the synestia's interior, they accumulated more and more vapor from the cloud around them, forming a series of "moonlets" and eventually the moon itself. While the synestia continued to cool and condense, the moon eventually escaped the cloud entirely, but remained in Earth's orbit.

According to this model, the moon inherited its composition from the Earth but lost some of its more easily vaporized elements to the intense heat of the synestia. This model adequately explains the moon's distinct composition as we understand it today, Stewart said.

One caveat to the new hypothesis: Synestias remain theoretical objects that have never been observed in the universe. Astronomers may one day be able to spot them forming in alien solar systems, the researchers said — and if they do, they just might confirm an important story much closer to home.