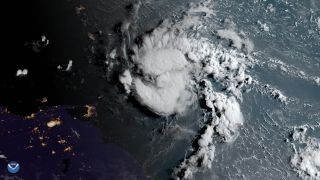 Hurricane Dorian will likely hit Florida Sunday (Sept. 1) as a Category 4 hurricane, according to the latest forecast from the National Hurricane Center (NHC).

The storm, which dealt Puerto Rico a comparatively mild blow Wednesday (Aug. 28), has since moved a couple hundred miles north. Dorian is tracking northwest toward Florida with maximum sustained winds of 85 mph (135 km/h), making it a Category 1 hurricane now. However, the NHC said, pressure inside the hurricane has dropped significantly, which should drive the storm to strengthen into a "major hurricane" on Friday. Faster winds have likely not yet appeared, because a "double-eyewall" structure has emerged in the hurricane, temporarily limiting the most extreme winds.

Meteorologists with the NHC warned that Dorian poses a major threat to the northwestern Bahamas and the southeast coast of the United States over Labor Day weekend.

It's too soon to predict precisely where the worst effects will happen, the NHC said. But already, forecasters expect that a wide region should experience heavy rainfall as the storm hits and moves inland next week, which may cause life-threatening flash floods.

The time to begin preparing for the storm in Florida and the northwestern Bahamas, the center said, is now.