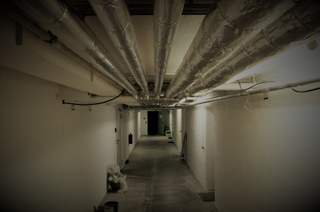 This image of a tunnel accompanied DARPA's tweet.
(Image: © DARPA)

Editor's note: An earlier version of this article suggested that DARPA was keeping the reason for the request a secret, and poked fun at the idea based on that premise. However, before it was published, DARPA clarified that the request was in support of the "urban" round of the Subterranean Challenge (SubT Challenge). Live Science regrets the error.

DARPA would like to borrow your labyrinthine network of underground, urban tunnels. But don't worry, the agency's got a perfectly good reason.

The agency clarified that the request was in support of the "urban" round Subterranean Challenge (SubT Challenge), a team-based competition to develop and use technologies for navigating unfamiliar underground spaces.

"As teams prepare for the SubT Challenge Urban Circuit, the program recognizes it can be difficult for them to find locations suitable to test their systems and sensors," DARPA Chief of Communications Jared Adams told Live Science in an email. "DARPA issued this [request for information] in part to help identify potential representative environments where teams may be able to test in advance of the upcoming event."

The underground tunnels, which the Defense Advanced Research Projects Agency requested someone hand over with just 10 days' notice, should be large, multilayered and difficult to navigate. It should belong to a university or commercial enterprise. It should not be accessible  to the public, though again: It should be in a city.

"The ideal space would be a human-made underground environment spanning several city blocks w/ [sic] complex layout & multiple stories, including atriums, tunnels & stairwells," the agency tweeted. "Spaces that are currently closed off from pedestrians or can be temporarily used for testing are of interest."

Related: 12 Other DARPA Projects We Do Know About

The agency included spooky images of dark urban tunnels, presumably out of concern that there might be someone out there who controls a sufficiently closed-off, complicated tunnel network but doesn't know what underground tunnels look like.

The Twitter thread began with a cheery "Attention, city dwellers!" (you know, that thing normal humans say when addressing other humans) and devolved from there into jokes about "demogorgons" from the TV show "Stranger Things." But it's remarkable that the official request went up late on Aug. 20 — just 10 days before the 5 p.m. EDT deadline on Aug. 30 — for someone to offer up a suitable tunnel complex.

Before the agency clarified the purpose of the request, Twitter users made a meme of the request, suggesting all sorts of reasons DARPA might be hanging out in the basement, and the story took on a life of its own. Adams noted that he'd spent his day trying to clear up "misperceptions" about the request.

Anyway, if you happen to be the owner of a buried tunnel system sufficient for DARPA's purposes, and enjoy the idea of people running around them trying to make the military better at doing war things, you can offer it up by 5 p.m. EDT tomorrow here on this website.