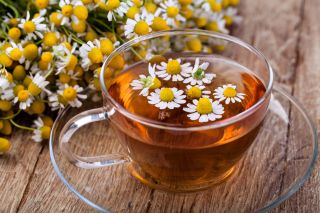 Anyone up for a cup of chamomile tea and flowers?
(Image: © Shutterstock)

Peter Rabbit had a rough day in Mr. McGregor's garden. As the bunny tried to fall asleep that night, Mrs. Rabbit, Peter's mom, knew just what he needed.

"His mother put him to bed and made some c[h]amomile tea, and she gave a dose of it to Peter!

'One table-spoonful to be taken at bedtime.'"

English author and illustrator Beatrix Potter wrote "The Tale of Peter Rabbit" in 1902, but Mrs. Rabbit was far from the first mother to use the herb to try to help a child sleep.

Related: Why Can't We Remember Our Dreams?

"We've seen writings and recordings of people using chamomile as a treatment of sleep for hundreds if not thousands of years," Eric Zhou, a faculty member in the Division of Sleep Medicine at Harvard Medical School, told Live Science.

But does drinking chamomile actually make people sleepy? The jury is still out, scientifically speaking, but no matter what the clinical trials say, there may be reason to keep steeping.

"Very few studies have analyzed the effect of chamomile tea [on sleep]. For insomnia, there are modest benefits," Zhou said, referring to a 2011 pilot study on people with chronic insomnia. Participants in the 28-day study took a capsule twice per day that contained either chamomile extract or a placebo. Though the study was small, it was randomized, double-blind and placebo-controlled, so researchers are reasonably sure the results they saw were due only to the interactions between the chemicals in the chamomile extract and the participants' bodies.

The study didn't find conclusive evidence that chamomile helped participants sleep better than the control group. There were modest improvements in the time it took the volunteers who took the chamomile capsules to fall asleep and in the number of times they woke up at night, but the effect wasn't large, said study lead researcher Suzanna Zick, a research associate professor in the Department of Family Medicine at the University of Michigan.

"Even if people took chamomile capsules, they did not sleep significantly better than those who took placebo capsules," she told Live Science via email.

A 2016 study of new mothers found that volunteers who drank chamomile tea every day for two weeks slept better and tended to have fewer symptoms of depression than subjects who didn't drink the tea. A 2017 study found that elderly patients who took a larger dose of chamomile extract than that given in the 2011 study slept significantly better than study participants who did not take the chamomile extract.

While these contradictory research results prevent scientists from giving a definitive answer on the biochemical effect of chamomile might have on the brain, there is good news for chamomile connoisseurs. Simply believing that something helps you fall asleep can, in fact, help you fall asleep.

Sleep quality is affected by a huge number of factors, including stress at home or at work, looking at bright screens in the hours before bed, and even the physiological stress of a hot day endured without air conditioning. As many insomniacs know, worrying about sleep can keep the mind going and make it even harder to fall asleep.

A cup of chamomile tea can help you sleep if you believe that it will, Zhou said. This doesn't work by sending positive vibes into the universe; it's a simple feedback loop.

If someone thought they were doing something to help them sleep, "they would feel less stressed about their sleep," said Zhou, who is also an attending psychologist at Boston Children's Hospital and the Dana-Farber Cancer Institute. And if drinking tea before bed helps you calm down, then the practice may also help you fall asleep.

In other words, don't let the clinical literature stop you from enjoying a nice cup before bed.

"Chamomile tea is very safe, so if it works for you, there is no reason to stop drinking it," Zick said.