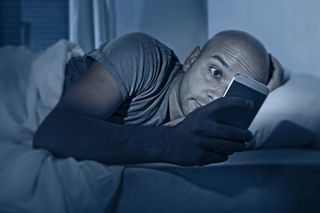 The more time you spend on your smartphone, the worse you'll sleep, a new study suggests.

People in the study who used their smartphones for more time during the month-long study period got less sleep and were less likely to sleep well than those who spent less time on their phones, according to the study.

And people who used their smartphones right before bedtime took longer to fall asleep, according to the study, published today (Nov. 9) in the journal PLOS ONE.

The findings suggest that "exposure to smartphone screens, particularly around bedtime, may negatively impact sleep," the researchers wrote.

In the study, researchers asked 653 adults to install an app on their Android phones that recorded how many minutes the phone's screen was turned on, whenever the phone was not in airplane mode. The researchers collected the data from each person's phone over 30 days. Two of the study's authors work for the company that made the app. [9 Odd Ways Your Tech Devices May Injure You]

Results showed that the participants used their phones, on average, for 1 hour and 29 minutes each day, the researchers found. There was no link between smartphone use and people's amount of physical activity, mood or body mass index, according to the study.

However, smartphone use was linked to sleep.

But in particular, smartphone use around bedtime was linked to lower sleep efficiency and longer time needed to fall asleep, according to the study. This finding suggests that "the relationship between overall smartphone use and sleep may be driven by exposure near bedtime," the scientists, led by Matthew Christensen, a researcher at the University of California, San Francisco, wrote.

"That increased screen time in the hour of and after bedtime, but not the hour before, was associated with [a longer time needed to fall asleep] agrees with the notion that screen use just before attempting to fall asleep may be particularly problematic," the researchers wrote.

Indeed, previous studies have suggested that screen time at night is associated with poor sleep and shorter sleep time, according to the study. This may be due to exposure to the blue light from screens, which may suppress the brain's production of the hormone melatonin, which is involved in sleep, the researchers wrote.

Apple, for example, is trying to address this problem with the "Night Shift" feature on the company's phones, which shifts the display from blues to warmer tones at night.

The researchers noted that there are several limitations to the study. For example, the participants, all of whom decided to join an app-driven study, may not be representative of the general population. In addition, it is possible that the measurements of screen time were not entirely accurate, because people may have let others use their phones for part of the time, or may have been unaware that their phone was "on," such as when it was in a pocket.

The investigators also noted that the study does not prove there is a cause-and-effect between smartphone use and worse sleep. It could be, for example, that people who generally have trouble going to sleep are more likely to turn to their phones at bedtime, the authors wrote.