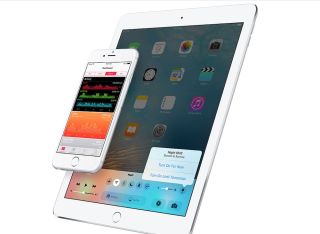 Apple's iOS 9.3 update will include a feature called Night Shift that is designed to help people preserve their circadian rhythms.
(Image: © Apple)

Apple's forthcoming iOS update promises to incorporate a feature called Night Shift that could help people sleep better. But what is it about smartphones that can mess with our slumber?

There is a growing body of research showing that exposure to bright blue light can disrupt people's sleep patterns, and this is exactly the kind of light produced by modern LCD displays such as those on smartphones and tablets.

But Apple is hoping to help users preserve their beauty sleep. [Read a review of the iPhone SE]

Along with various other health-focused apps, the new version of Apple's mobile operating system, iOS 9.3, will include the Night Shift feature. This app will use the device's clock and geolocation to determine what time the sun sets and will automatically shift the phone's display color to the warmer, or redder, end of the light spectrum until the following morning.

Apple is not the first company to attempt to tackle this problem — apps like f.lux and Twilight have been around for years and are designed to make similar color adjustments. But Apple's update signals growing awareness of the potential negative health effects of using smartphones and tablets late at night.

Circadian rhythms are 24-hour cycles that control the timing of many physiological processes in animals, plants, fungi and even some bacteria. In animals, these rhythms determine sleeping and feeding patterns, as well as brain activity, hormone production and cell regeneration.

Studies have shown that disturbing these rhythms can increase a person's chances of developing a variety of serious diseases. "Misalignment or disruption of these rhythms may result in acute and/or chronic health problems, including obesity, diabetes, cancer risk and cardiovascular disease," Chang told Live Science.

In mammals, these rhythms are controlled by a so-called circadian clock — a group of nerve cells in the hypothalamus region of the brain called the suprachiasmatic nucleus (SCN). This "body clock" is sensitive to a variety of environmental cues, but principally light, Chang said.

Special cells in the eye known as retinal ganglion cells contain a light-sensitive protein called melanopsin. These cells are linked to the neurons of the SCN and provide information on the level of light in the environment.

When it is light out, the SCN suppresses production of the hormone melatonin — which makes humans sleepy — by the pineal gland. When it gets dark, this suppression stops, and melatonin production ramps up, making you feel tired. This is how the body matches sleep cycles with the Earth's 24-hour cycle of light and darkness.

"As diurnal animals, humans are active during the light portion of the 24-hour day and sleep during the dark portion," Chang said. "However, when we are exposed to light at a time when we normally would not be — i.e., during the night — this alters our circadian rhythms, shifting them to another time." [How to Enable Night Shift in iOS]

This shift is what helps travelers get over jet lag, which occurs when people rapidly cross time zones, thanks to air travel. Initially, people will likely feel groggy and tired during the day or unable to sleep at night, but over time, circadian rhythms will adjust to the day-night cycle of the new environment.

But exposure to artificial light at unusual times can cause similar shifts that disturb natural circadian rhythms. And Chang said human retinal ganglion cells are particularly sensitive to light with shorter wavelengths at the blue end of the spectrum, such as the light produced by smartphone, computer and TV displays.

While modern LED domestic lighting is often blue-light-enriched as well, the displays on many popular gadgets are more likely to have a negative effect, Chang said. "The reason for the focus on phones, laptops, tablets and other portable light-emitting devices as causing issues with circadian rhythms is that they are light sources that the user looks directly into, as opposed to an ambient light source," she said.

And although Chang has not personally investigated the effectiveness of features like Apple's Night Shift mode that filter out blue light, she said studies by other researchers have shown that filtering out shorter wavelengths can decrease the impact on circadian rhythms.

Steven Lockley, a sleep expert and neuroscientist at Harvard Medical School, said mobile devices are a particular concern due to how close the light source usually is to a person's eyes. But it's important to remember that all light, not just blue light, will increase alertness and have an effect on the body clock, he added.

"These approaches do not eliminate the problems caused by using electronic devices after sundown , they just try to reduce their impact, which is good, but avoiding their use as long as possible before bed is a better solution" he said.