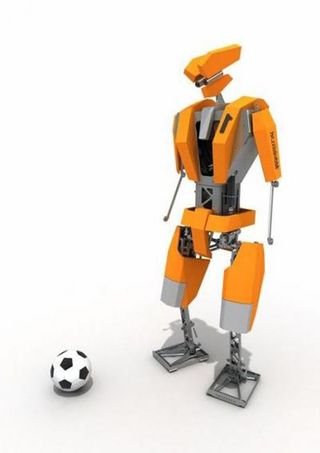 A member of the Dutch RoboCup team, which is to participate in the 2008 RoboCup Soccer competition in China this summer.
(Image: © TU Delft)

Robots are stepping out everywhere these days, from fashion show catwalks to the rugged mountains of Afghanistan. But not all of them walk the same way, or with the same purpose.

A Japanese humanoid robot made its debut this week at a fashion show, although news reports noted that its smooth walk still didn't measure up to the stride of a human supermodel. HRP-4C represents just the latest robot attempting to achieve bipedal walking, which remains a distinctly human feature in comparison to most animals.

Contrast that with the four-legged BigDog, a mechanized mule of a 'bot that is reportedly undergoing field trials with U.S. troops deployed in Afghanistan. BigDog can run at up to 4 mph, climb 35-degree slopes and navigate rubble while carrying up to 340 pounds.

Robots certainly need not be limited by the range of human motion, and yet many laboratories all over the world are working on two-legged robots. The difficulty of creating a comfortably bipedal 'bot means that such prototypes may not find such immediate practical use, as opposed to robots that take on whatever form their function requires.

However, the urge to create artificial beings that move like people may reflect more about humanity's ongoing fascination with itself. And the human-robotic merger shows no signs of slowing down over the coming decades.