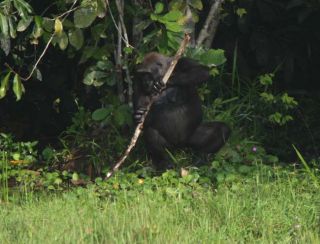 Efi using a branch for support as she searches for herbs.
(Image: © Thomas Breuer/WCS/PLoS Biology)

Wild gorillas use tools every day, but scientists never had lasting proof until two tool-using apes were recently caught on film.

While all other great apes – such as chimpanzees and orangutans – have been observed using tools in the wild, these photographs provide the first evidence of tool-savvy wild gorillas.

One gorilla used a long stick to test the depth of a pool of water before wading into it. Another used a stick to help search for food and then as a bridge over a muddy puddle.

"This is a truly astounding discovery," said Thomas Breurer of the Wildlife Conservation Society. "Tool usage in wild apes provides us with valuable insights into the evolution of our own species and the abilities of other species."

A female gorilla, nicknamed Leah by scientists, waded into a pool of water and found herself waist deep after only a few steps. Leah returned to shore and found a long branch and used it to test the depth of the pool as she waded back in.

Efi, another female western gorilla, supported herself with a piece of tree trunk while she searched for herbs. Efi's tool also served as a bridge over muddy patches of ground.

Prior to this discovery, most observed tool usage by wild great apes related directly to obtaining food, either by cracking nuts with rocks or using twigs to eat termites. This research shows that other factors, such as habitat, can inspire tool use.

The observations were made on two separate occasions in Mbeli Bai, a swampy clearing in the Nouabalé-Ndoki National Park in the northern rainforests of the Republic of Congo.

The Wildlife Conservation Society has studied gorillas and other wildlife in the Republic of Congo since the 1980's, and in 1993 helped establish the Nouabalé-Ndoki National Park. The WCS currently manages the Mblei Bai site to support long-term gorilla research and ecotourism projects.

The findings will be published in the November issue of the open access online journal the Public Library of Science.

Discoveries that have helped build the puzzle of mankind's evolution.