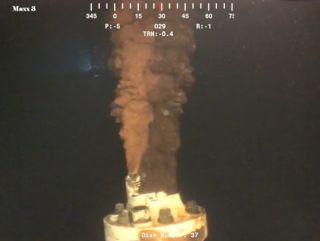 A seafloor experiment designed to monitor deep-sea vents turned into the perfect tool for gauging the amount of oil that escaped the Macondo Well into the Gulf of Mexico during the Deepwater Horizon disaster.

Researchers looked at almost all the high-resolution video of the spewing oil released by BP and the government. They then applied their technique to assess the oil's billowy movement in short clips and estimate the volume of oil that leaked out.

Their analysis shows that the Deepwater Horizon disaster easily topped the Exxon Valdez tanker spill by releasing more than 10 times the amount of oil into the Gulf. It also found that an earlier spill estimate of just 5,000 barrels of oil per day was 10 times less than the actual flow rate.

"This is a great example of how basic research that doesn't seem to have any immediate value suddenly gains huge immediacy for society," said study researcher Timothy Crone, a marine geophysicist at Columbia University, in a statement.

Crone and his colleague, Maya Tolstoy, had first developed the optical plume velocimetry technique to analyze underwater camera footage of deep-sea vents in the offshore waters near the U.S. Pacific Northwest.

But they became go-to experts for estimating the true oil spill rates in May, after it became clear that the 5,000 barrels-per-day estimate was a lowball figure.

How to gauge a gusher

The researchers based their new estimates on two 20- to 30-second video clips, one taken before the removal of a damaged riser pipe on June 3 and the other after.

Additional calculations eventually led to an estimated flow rate in barrels of oil spilled per day, Crone explained in an e-mail. The full study is detailed in the Sept. 23 online edition of the journal Science.

Crone and Tolstoy estimate that 56,000 barrels per day flowed into the Gulf waters from the broken riser pipe between April 22 and June 3, starting from the date when the oil rig exploded and sank.

Removal of the oil well's riser pipe then allowed 68,000 barrels of oil to spill forth each day, until BP finally sealed the well on July 15.

Getting it right for the future

"I do not know if any additional video is available," Crone told LiveScience. "If it is, I would be quite interested in evaluating it."

The estimated 4.4 million barrels of oil that spewed uncollected into the Gulf easily makes the Deepwater Horizon disaster one of the worst oil spills in history. Only the Persian Gulf War oil spill would top that amount with an estimated 8.8 million barrels.

An "oily snow" mix of degraded oil and organic material has already begun to coat the seafloor. Now researchers are scrambling to figure out the long-term effects.