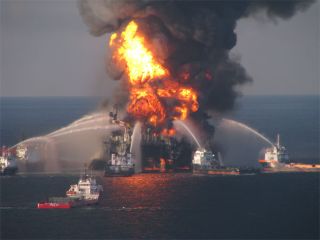 The explosion and sinking of an oil rig in the middle of the Gulf of Mexico on Tuesday has created a potentially serious environmental situation, though experts are not sure how bad it might be. That all depends on whether the oil from the rig's well spills and where it goes.

From what we do know, here are answers to some common questions about oil spills:

Q: Why do so many oil spills happen?

In brief, because there are a lot of tricky steps to get oil from inside the Earth to inside, say, your gas tank. Oil spills can be caused by the accidental or intentional release of any form of petroleum during any point in the oil production process, from drilling, refining, or storing to transporting. Oil can be spilled when a pipeline breaks, ships collide or are grounded (as happened earlier this month along the Great Barrier Reef), underground storage tanks leak, or in the current case, when an oil rig explodes or is damaged.

Some oil was spilled when the Deepwater Horizon rig first burst into flames on April 20 in the Gulf, injuring crew members and sending a billowing plume of black smoke into the sky that could be seen by satellite.

The oil rig, located about 51 miles (82 kilometers) southeast of Venice, La., then sank into the Gulf waters Thursday morning, creating concern that more oil could spill.

Oil spills can also happen naturally: Oil is released into the ocean from natural oil seeps on the seafloor. The best known such seep is Coal Oil Point along the California coast where an estimated 2,000 to 3,000 gallons (7,570 to 11,400 liters) of crude oil is released each day.

Q: How fast does oil in a spill spread?

Oil can spread very rapidly unless it is quickly contained by a boom (a large floating barrier that can round up and lift the oil out of the water) or other mechanism.

The lighter the oil is, the faster it can spread — so gasoline would spread faster than thicker, black oils, such as the crude oil from the Deepwater Horizon. But even heavy oil can spread quickly in a major spill, spreading out as thin as a layer of paint on a wall in just a few hours, according to the U.S. National Oceanic and Atmospheric Administration (NOAA).

Q: How does this incident compare with the Exxon Valdez oil spill?

So far this oil rig explosion is on a much smaller scale than the Exxon Valdez disaster, which is one of the biggest human-caused environmental disasters in history. The oil that has spilled into the Gulf so far this week is from the initial rig explosion and the rig's sinking. And there doesn't seem to be any oil seeping up from the seafloor drilling hole, experts say.

If oil did start seeping up from that hole, it could cause some 336,000 gallons a day to spill into the ocean, according to news reports. In comparison, when the Exxon Valdez tanker ran aground on the Prince William Sound on March 24, 1989, it spilled 10.8 million gallons of crude oil into the sea, covering 1,300 square miles (3,366 square kilometers). It would take months for the broken oil rig to reach that amount.

Oil slicks, like the one currently floating in the Gulf, affect wildlife by coating their bodies in the water-repelling gunk. Since it floats, all sorts of marine animals, even birds, can take a hit. And fish sometimes mistake the floating slick for food and so are attracted to it, according to the Australian Maritime Safety Authority.

When birds' feathers get coated with oil, they lose their ability to trap air and repel water, meaning the animals can't maintain body heat. The result: hypothermia. Marine animals, such as sea otters, which depend on their clean fur coats to stay warm, can also become hypothermic, according to the Oiled Wildlife Care Network.

Currently, the oil rig is currently well offshore, though experts have said any turn in winds and currents could send oil toward coastal wetlands where plenty of animals live. In addition, a pod of sperm whales is known to feed in the area of the oil well where the Deepwater Horizon sank, according to news reports.

Q: What percentage of U.S. oil comes from offshore rigs?

According to the Minerals Management Service, offshore drilling in U.S. territorial waters accounted for 30.2 percent of U.S. oil production in 2009 (379 million barrels of oil), and 11.4 percent of U.S. natural gas production (1.6 trillion cubic feet or about 12 trillion gallons).

Q: What is crude oil?

Most of the oil products in the United States are made out of crude oil – the rough, unprocessed form of oil. Gasoline, heating oil, petroleum and diesel fuel are all made from crude oil. Depending on the stage of processing, any one of these oils can get spilled into the environment. If the spill happens during the extraction process, crude oil is leaked. However, if the spill occurs after the crude oil has been refined, diesel fuel or petroleum is leaked. If the spill happens when a tanker's fuel supply is punctured, gasoline – another refined crude oil product - would seep into the environment.

Q: What type of oil spill causes the most harm?

Crude oil and other so-called heavy oils are dangerous in a different way. Although they are less toxic, they are thick and gluey and can smother living creatures. By covering the feathers of birds or the fur of marine mammals, these oils prevent the animals from maintaining their normal body temperatures, leading to death from hypothermia. And these oils don't evaporate, so they can remain in the environment for much longer.

Q: How much oil is spilled into the ocean every year?

According to the U.S. Department of Energy, 1.3 million gallons (4.9 million liters) of petroleum are spilled into U.S. waters from vessels and pipelines in a typical year. A major oil spill could easily double that amount.

Approximately 1.7 billion gallons (6.4 billion liters) of oil were lost as a result of tanker incidents from 1970 to 2009, according to International Tanker Owners Pollution Federation Limited, which collects data on oil spills from tankers and other sources.

Q: What is the world's biggest oil spill?

The Persian Gulf oil spill of 1991 is so far the biggest oil spill in the world. As Iraqi troops retreated from Kuwait during the first Gulf War, they opened the valves of oil wells and pipelines, pouring up to 8 million barrels into the Gulf, though estimates on the exact amount of oil spilled vary. This would put this spill at several times the size of the Exxon Valdez disaster.

Q: How many oil spills are caused by rigs and how many by tankers?

Between 1971 and 2000, tankers and barges were responsible for 45 percent of the volume of oil spilled in U.S. waters, according to a 2002 U.S. Department of the Interior Minerals Management Service report.

In that same period, pipelines were responsible for 16 percent of the volume of oil spilled in U.S. waters. This includes both onshore and offshore pipelines, though onshore spills accounted for most of the pipeline spillage into U.S. waters — 92 percent or more in each decade.

Between 1971 and 2000, U.S. Outer Continental Shelf (OCS) offshore facilities and pipelines accounted for only 2 percent of the volume of oil spilled in U.S. waters.

The amount of oil from different types of spills can vary from year to year.

Q: Where do most oil spills happen in the world?

Analysts for the Oil Spill Intelligence Report have reported that spills in that size range have occurred in the waters of 112 nations since 1960. But certain areas see more spills than others. The Report identifies these "hot spots" for oil spills from vessels:

Q: When was the first oil spill in the United States?

While no one is certain of the answer, oil experts have suggested some possibilities, including natural oil seeps that were in the water even before man-made ones, according to NOAA.

Where does oil come from originally?

Scientists aren't sure. Contrary to popular explanations, it's not mostly from dinosaurs. Oil is thought to be the result of chemical processes affecting remnants of tiny organisms — such as plankton in the sea — that lived millions of years ago. But scientists admit they're not sure how oil was made.