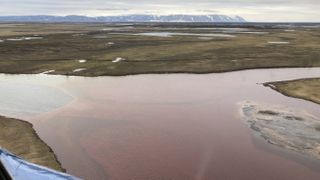 A helicopter view of the site of a diesel fuel spill at Norilsk's Combined Heat and Power Plant No 3, shown on June 2, 2020.
(Image: © Andrei Marmyshev\TASS via Getty Images)

Twenty-two thousand tons (20,000 metric tons) of oil products leaked from a Russian industrial power plant into a river in the Arctic Circle on May 29.

Russian president Vladimir Putin declared a state of emergency in the region around the Ambarnaya River, in eastern Russia, due north of Mongolia. According to Reuters, two days passed before local authorities learned of the spill from the Nadezhdinski (also spelled Nadezhdinsky) Metallurgical Plant. Even then, local officials only learned of the spill from social media. Per Reuters, Russian environmental agencies have said 16,500 tons (15,000 metric tons) of oil entered the river system, while an additional 6,500 tons (6,000 metric tons) leaked into the soil.

(These numbers do not perfectly add up to 22,000 tons. Live Science has reached out to Russian state authorities for more precise information.)

Related: The history and science of oil spills

The metallurgical plant is located near Norilsk, a city of 180,000 that sits 190 miles (300 kilometers) north of the Arctic Circle, according to Reuters.

According to Reuters, the spill included both diesel fuel and lubricants.

Putin put blame on Alexander Uss, the region's governor, for the spill, according to CNBC, saying publicly, "What are we to learn about emergency situations from social networks? Are you alright health-wise over there?"

In a statement reported by CNBC, Norilsk Nickel — the company that owns the plant — said that beams supporting a storage tank suddenly sank, triggering the spill. Norilsk Nickel is also the world's largest palladium producer and a major producer of nickel, platinum and copper

"In total, Norilsk Nickel has mobilized 250 personnel and 72 equipment items to work on the liquidation. As of June 3, a total of 262 [metric] tons of diesel fuel has been collected near HHP-3 [the power plant], a total of 800 cubic meters [28,000 cubic feet] of contaminated soil has been removed and approximately 80 [metric] tons of fuel has been collected from the spill to Ambarnaya river," the company said in a statement.

Russian government sources translated by Reuters said the river will need "decades" to recover from the damage.