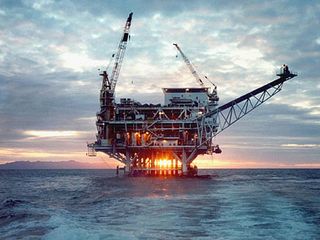 Almost all geochemists believe petroleum results from a few million years of decay of once-living organisms.

"We can tell that by looking at biomarkers in the oils," Kenneth Peters, an organic geochemist at Stanford University, told Life's Little Mysteries. "Molecules in oil have the same backbone structures that we find in living organisms ."

So what process turns the latter into the former? [Why Is the Ocean Blue?]

It mostly happens in sediment deposits that collect in depressions at the bottom of the ocean. When phytoplankton, algae and other marine organisms die, they drift to the seafloor, collectively forming sedimentary drifts of decaying organic matter. These get lodged in places where tectonic plates are subsiding.

Proteins, lignin and cellulose break down very quickly into amino acids and sugars; they turn into sludge. "There is one fraction of organic matter that is preserved in sediments, and that's the lipid fraction. That contains the precursors we find in crude oil," said Peters. Fats last forever.

As more and more sediment layers accumulate, the bottom layers get compacted by the increasing pressure bearing down on them. This in turn ramps up their temperature. Over geologic time, turning up the heat catalyzes the chemical processes that cause extremely heavy and complex molecules called kerogens to assemble from the dismantled components of organic molecules. These kerogens, along with long-lasting lipids and scant leftover bits of cell wall, make up the raw material that will turn into petroleum.

When a kerogen layer gets buried one to three miles deep, the temperature climbs to the 120 to 300 degree-Fahrenheit range, and the pressure escalates. Over the course of several or tens of millions of years, the carbon bonds in kerogen and the other molecules break apart. This process, called "cracking," produces the simple hydrocarbon molecules that we call petroleum.

Methane, propane, asphaltene and propylene are all examples of petroleum hydrocarbons, which differ from each other in the way the hydrogen and carbon atoms that compose them are arranged. Some hydrocarbons exist as liquids while others are gaseous, and they are thus known as oil and natural gas, respectively.

"The expansion that occurs when the kerogen becomes a gas or liquid makes it like a pressure cooker," said Peters. "Eventually the surrounding rock fractures and that's when we get expulsion. The oil migrates out of the source rocks to places where the pressure is lower."

It usually moves upwards through permeable rock, such as sandstone (which has been piling up on top of it for eons), until it encounters what scientists refer to as a seal, or trap. "This could be a salt or stone structure that traps oil or gas below it," Peters said.

"To find petroleum reserves, geophysicists look for inverted bowls or other landforms that act as structural traps," he explained. These may be deep under the seafloor , or, since tectonic plates shift, below land.