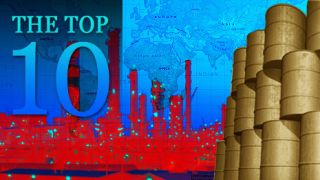 Surprising to many, 13 percent of the world's oil is under Canada. But the majority of it is embedded in oil sands, deposits of bitumen that must be treated to convert into crude oil before they can be refined to usable products.

Only slightly larger than Alaska, Iran contains almost 10 percent of the world's oil supply. But the country is subject to U.S. economic sanctions and export controls and therefore does not directly contribute to the U.S. import supply.

Iraq's economy is mostly driven by oil. More than 8 percent of the world's oil is in Iraq, providing about 95 percent of the country's foreign exchange earnings.

At present levels of oil and gas production, the UAE reserves should last for more than 100 years. About 7 percent of the world's oil reserves were discovered here about 30 years ago, even though the region is smaller than the state of Maine. The UAE has gone from an impoverished land to one with high standards of living.

Kuwait is a small and rich country that boasts almost the same amount of oil reserves as the UAE. Since its US-led liberation, Kuwait has spent more than $5 billion to repair its oil infrastructure, which was damaged during Iraq's invasion.

About 80 percent of this South American country's export earning comes from the petroleum sector. Holding 5.6 percent of the world's oil reserves, Venezuela is an important source of crude oil for the United States and contributes to 11 percent of imports.

Russia's reserves top 5 percent, and though relatively low on this list, the country is second only to Saudi Arabia in production and net exports. Strong oil export earnings allowed Russia to increase its foreign reserves in 2005. Russia is the fifth largest consumer of oil in the world.

This North African country's economy depends mostly on revenues from its 3 percent share of known world oil reserves, contributing to about 95 percent of its export earnings.

Nigeria is an oil-rich country with a strong dependence on its oil sector. More than 2.5 percent of the world's known oil is in Nigeria.