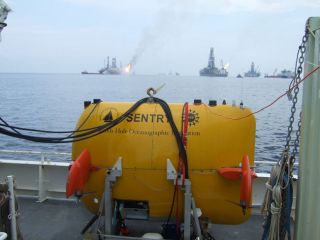 A massive oil plume from the Deepwater Horizon blowout may survive for longer than expected against the petroleum-eating microbes in the Gulf of Mexico, according to a new study.

Researchers took a "forensic snapshot" in late June that showed higher-than-expected oxygen levels in the plume from the oil well that began gushing in April. If microbes had swarmed into the area, their feeding frenzy should have reduced oxygen levels.

But the scientists said they have only just begun to analyze all the hydrocarbon molecules found in the oil plume, which typically serve as food for the microbes. They also cautioned that the study represented just one moment in time and space, and does not show what has happened to the plume since June.

"This was two weeks in June and a relatively small area in a very large body of water," said Christopher Reddy, a marine geochemist at the Woods Hole Oceanographic Institute (WHOI) in Massachusetts, during a press conference on Thursday.

A monster of a plume

A research ship and its companion underwater robot tracked the oil plume out to at least 22 miles (35 kilometers) from the leaking oil well. Scientists aboard spent 10 days taking samples before the threat of Hurricane Alex forced them to break off.

"Unfortunately we were not able to track this out beyond 35 kilometers, although the data suggested that the plume extended for much farther than we tracked it," said Richard Camilli, a chief WHOI scientist of applied ocean physics and engineering, and lead author on the study paper detailed in the Aug. 19 issue of the journal Science.

Mass spectrometers aboard the robotic sub that were lowered from the ship allowed the team to begin fingerprinting the hydrocarbon molecules in the oil.

But the overall chemical analysis remains incomplete, and so the total amount of oil in the plume remains unknown. Questions about the possible hazards of the oil plume for marine life also remain up in the air.

"Without the complete picture of all the components of hydrocarbons, we can't say much about its bioactivity or toxicity," Camilli said.

When the Deepwater Horizon rig first sank and unleashed an oil spill into the Gulf, experts had counted upon microbes to help break down the oil plumes. But the latest findings suggest that the microbes may feed slower than expected.

The plume also retained its massive size more than three months after the oil began gushing from the well.

Still, the results did not surprise David Valentine, a marine geochemist at the University of California, Santa Barbara who did not take part in the new study. He had participated in a separate expedition that found higher levels of microbial activity closer to the oil well.

Valentine pointed out that the new study has not yet analyzed many of the hydrocarbons in the oil plume. He added that the microbes might have quickly swarmed the leaking oil well area at first, but then slowed down in activity during the following months.

"I think we'll find it's a buffet [of hydrocarbons] down there," Valentine told LiveScience. "The filet mignon may go quickly, but the taco bar will stay around for a while."

The study's researchers also gave their own warnings about drawing any premature conclusions.

"Microbes are a lot like teenagers," Reddy said. "They work on their own time, their own scale, they do what they want when they want, and so it is often difficult to make predictions about microbe degradation, and in fact it may vary substantially in the Gulf in any one time."

Lost and not yet found

The WHOI team hopes to also get a sense of what hydrocarbons have evaporated, and what has remained in the oil plume.

But first, researchers must relocate the oil plume again. That task of finding the missing plume has become harder since BP managed to temporarily cap the leaking oil well on the bottom of the Gulf.

"The faucet has been shut off," Reddy acknowledged. "We don't know where these hydrocarbons are, we saw them in June."

The capping of the oil well means that researchers can no longer track the oil plume from its source, Valentine explained.

"It's a needle in a haystack problem," Valentine said. "It's a very large area, and it's not a massive feature yet. But it will expand. Somebody will find it."