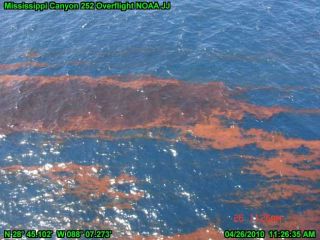 Sizing up the oil gusher from the Deepwater Horizon disaster has proven difficult so far, but one scientist suggests that measuring methane in the water could give a better idea of how much oil has spilled into the Gulf of Mexico.

Methane makes up about 40 percent of the leaking crude by mass, according to BP. Much of the gas (made up of one carbon and four hydrogen atoms) would dissolve into the water as it rises up from the oil well deep below the surface, and many U.S. research vessels already have the equipment to estimate the size of these rising methane plumes.

"Methane follows the water [currents], so if you can follow the water you've got a pretty good idea of where to look for the plumes of gas," said David Valentine, a marine geochemist at the University of California, Santa Barbara.

But the methane won't linger in the waters forever, and so that puts some pressure on the National Oceanic and Atmospheric Administration (NOAA) and researchers to get started.

Why methane is better

Getting an accurate estimate of the amount of leaking oil based on the oil itself has been tricky. For one, there's always great uncertainty about the mix of oil-water-gas at any given time.

In addition, "spot measurements of the flux at any given moment can’t be scaled up reliably, because the flow may not be constant," Valentine writes in an opinion article published in the May 23 issue of the journal Nature. "Satellite photos and boat measurements help to assess the distribution and thickness of the surface slick, but these measures are also highly variable with time, place, weather conditions and dispersant application."

However, methane, in addition to not being a mixture, dissolves uniformly in seawater.

How to get it done

The first research ship to reach the scene of the spreading oil slick has already found large amounts of methane. Some methane seeps out naturally beneath the Gulf of Mexico, but scientists can use measurements such as isotopic composition and oxidation rates in the water to filter out that background signal and identify on the methane from the spill. (Isotopes are atoms of the same element but with different numbers of neutrons, and can differ depending on their source.)

Two ships looking specifically for methane could do the job for less than a few million dollars, Valentine said.

"I don't think finding plumes is going to be very difficult," Valentine told LiveScience. "Finding all of them will be much trickier."

Even measuring ethane or trace gases such as helium might work for the experiment, Valentine said. He envisions one ship starting its measurements right on top of the oil gusher site. The second might start far out and move toward the site to find the outermost spread of any methane plumes.

The scientific vessels would deploy submersible instruments deep down that could return data via wire to researchers at the surface. Getting estimates of methane-plume movement in the water could also help estimate the rate of the spill from the gushing oil well.

Still, scientists would also need to figure out just how much methane from the oil gusher ends up dissolving in the water, and how much might end up trapped within the oil slick on the surface or even escape into the air.

A recent study with satellite-linked underwater probes in roughly the same region of the Gulf of Mexico showed that all except one ended up circulating within the region for three years. That gives scientists some hope that methane plumes will also remain within the area.

"The biggest concern is that some massive plume gets washed away quickly and becomes hard to track," Valentine said.

Yet there's still a strong urgency to act, Valentine pointed out. Gulf microbes that break down methane will gradually consume it within a year, but that time period could be shorter if microbes have crowded toward the unexpected methane bounty from the oil well.

Valentine has urged that the two-vessel expedition reach the area by June, so that the main methane plumes should still be around. Any delay beyond that point leaves more room for uncertainty about how long the methane stays concentrated.

For now, Valentine can only wait and see if the scientific community adopts his plan or not. But he already plans to get out to the oil spill site for other research – a topic which came up unexpectedly when a phone call interrupted the interview.

"I have to take this," Valentine said. "It's actually about getting out on the boat."