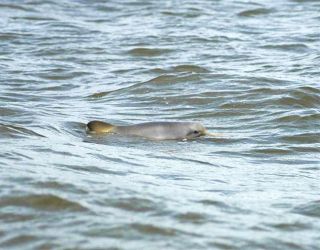 A vulnerable coastal dolphin species has nowhere to hide from scientists, who are using DNA and satellites to track and learn more about the rare animal.

Conservationists are using these tools to gain new insights into the world of a poorly known coastal dolphin species of eastern South America called franciscana, or the La Plata dolphin.

The study looked at DNA samples taken from dolphins that had been stranded, entangled in fishing gear, or captured and released in six locations along coastal Argentina and data from NASA's SeaWiFS and MODIS satellites, which monitor ocean conditions.

Researchers found at least two genetically distinct populations of franciscanas in Argentina's coastal waters and learned that environmental differences — temperature, turbidity of the water, and chlorophyll levels in the ocean — are probably involved in creating those distinct populations, the researchers suggest.

How these factors influence franciscanas populations is unclear, Martin Mendez of Columbia University told LiveScience. One possibility is that all three are physical attributes of the environment that dolphins are able to sense and then use to make decisions. For example, chlorophyll levels are an indicator of ocean productivity (such as different kinds of ocean plants, as well as the fish and other animals that eat them), and so can indicate the amount of food resources available in an area for the dolphins.

However, by measuring these variables the research team showed that even geographically close environments are actually distinct and inhabited by genetically distinct populations of La Plata dolphins. Their findings are detailed May 4 in the online edition of journal Molecular Ecology.

"The availability of both genetic and environmental data provided us with a rare opportunity to examine how ecological factors affect population structure in a marine species," said Mendez. "In this instance, the study subject is possibly the most endangered cetacean in South America, so delineating populations and the factors that create them certainly plays an important role in conservation measures."

Cetaceans are the group of marine mammals that include whales, dolphins and porpoises.

In comparing the DNA and satellite data, researchers were surprised to discover that dolphins in closely located sites in the northern portion of the study area, near the La Plata River estuary, were most genetically different. In particular, two groups of dolphins only about 22 miles (35 kilometers) apart were the most genetically dissimilar, a finding that coincided with environmental differences between the two populations. In contrast, two sites separated by hundreds of miles to the south were found to be the most similar. As a result of the study, the researchers recommend that the genetically distinct population of franciscanas to the north of Buenos Aires should be protected as part of a larger effort to save the species.

Franciscana, one of the world's smallest cetaceans, averaging  between 5 and 6 feet in length (1.5 to 1.8 meters) and around 80 to 90 pounds in weight (36.2 to 40.8 kilograms), are found along the Atlantic coastal waters of South America, from southern Brazil to Península Valdes in Argentina. The species is listed as "Vulnerable" by the World Conservation Union (IUCN), which is one step below "Endangered." The dolphins are threatened by accidental capture in gill nets and other fishing gear.