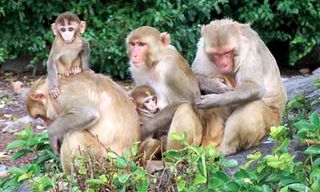 Rhesus monkey mothers with young. When the little ones cry, the and the mothers get attcked more often.
(Image: © Stuart Semple)

When baby rhesus monkeys want to suckle, they do what human infants do: cry, cry, cry. Mothers often give in, naturally. When they don't, the babies' cries get on everyone's nerves — sometimes with nasty consequences.

In rhesus society, dominant individuals aren't shy about showing anger by chasing, pushing, hitting, or biting a mother and her youngster that aren't family. Stuart Semple, an anthropologist at Roehampton University in London, and two colleagues recently observed such hostile behavior in wild rhesus monkeys in Puerto Rico.

The team calculated that bystanders are about 35 times more likely to attack both mother and infant when the baby is crying than when it's hushed.

Quite understandably, mothers appear to pay attention to who's around when their young cry. Semple's team observed that when dominant bystanders were nearby, mothers acquiesced to their babies' demands about twice as often as when they were alone or in the company of close relatives, which are more forgiving of tantrums.

The study shows for the first time that, much like people, monkeys are aware of the social consequences of not only their own actions, but those of their babies, too.

The findings were detailed in the Proceedings of the Royal Society B.

{{ video="LS_080829_DrKaur" title="Among the Chimps" caption="Taranjit Kaur is trying to learn why chimpanzees of Mahale Mountains National Park in Tanzania are dying. Credit: Credit: NSF/Edited by LiveScience" }}