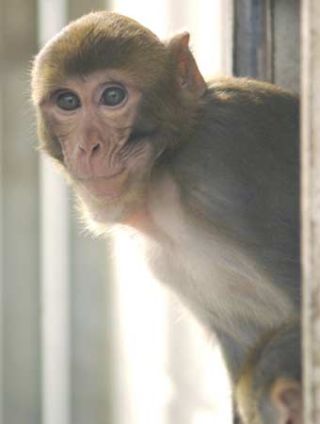 The first primate to get rocketed into space and to be cloned, the rhesus monkey, has now had its genome sequenced, promising to improve research into health and yield insights into human evolution.

Analysis of the monkey's DNA sequence has also deepened a few mysteries in our understanding of the biology of primates when it comes to vital parts of our biology, such as the X chromosome.

Rhesus macaques (Macaca mulatta) are sandy-furred, pink-faced monkeys that live in the region ranging from Afghanistan to northern India, as well as southern China, and are traditionally held as sacred in Hinduism.

They have a long history as lab monkeys. For instance, the Rh factor in blood discovered in 1937, the presence or absence of which dubs a person's blood type either 'positive' or 'negative,' derives its name from rhesus monkeys. Even now, they are the animals of choice for research into drug addiction and HIV, and roughly two-thirds of all National Institutes of Health-funded primate-related studies use the monkeys. For example, the rhesus monkey Tetra, born in 2000, was the first cloned primate.

The sequence of the rhesus macaque's genome will be a powerful tool for research with the monkeys aimed at understanding human biology, said consortium leader Richard Gibbs, director of the Baylor College of Medicine's Human Genome Sequencing Center in Houston.

"Right now if you perform an experiment on a person, there's no way that you would think that all people are the same, when it comes to a response to a drug or behavior or anything," Gibbs told LiveScience. Macaques have about the range of diversity when it comes to their genetics, "so being able to understand them on a genetic level will help explain variation in their responses and will allow for smarter experiments that make us more clever at deciphering results."

In addition, the researchers identified roughly 200 genes that appear to be key players "in defining the shapes of species, in what makes the primates different from us and each other," Gibbs said. These include genes involved in hair formation, sperm-egg fusion, immune response and cell membrane proteins, findings detailed in the April 13 issue of the journal Science.

The research also raised a few surprises. For instance, the monkey's X chromosome showed an unexpectedly large number of times in which its parts got shuffled around. This is consistent with the same mysterious rearrangements seen in the human lineage's X chromosome following the branching off of the chimpanzee, and gives "us new evidence of the unusual role of this sex chromosome in primate evolution," said researcher Aleks Milosavljevic at the Baylor College of Medicine.

Another as yet unexplained phenomenon the sequencing revealed has to do with lumps of DNA known as centromeres, which hold together the two separate strands of DNA that make up a chromosome, acting somewhat like the center of an X. Strangely, nine of the 22 centromeres the monkeys have repositioned themselves on their chromosomes in the last 25 million years. As to why this happened, "no one knows," said researcher Mariano Rocchi at the University of Bari in Italy.

The rhesus monkey genome sequence should prove invaluable to biomedical research, said physician scientist Ajit Varki at the University of California at San Diego, who participated in the chimpanzee genome sequencing project. "And if we can get the genome sequences of one representative from each primate lineage, we could reconstitute the ancestral primate genome--what the genome of our common ancestor some 40 to 50 million years ago looked like," he told LiveScience. "That would be an amazing feat."