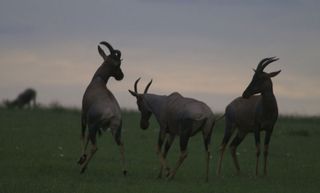 Among promiscuous African topi antelopes on the savannah, the battle of the sexes runs in reverse—females aggressively compete for mates, while the males play hard to get.

Such role reversals more common in the animal kingdom than currently thought.

Females of most species are typically seen as choosy about whom they mate with because they often have to pay a high price biologically for bearing offspring. On the other hand, males, for whom sex is often cheap, will try and mate as often as possible, or so the stereotype goes.

"When biologists talk about the 'battle of the sexes,' they often tacitly assume that the battle is between persistent males who always want to mate and females who don't," said researcher Jakob Bro-Jorgensen, a zoologist at the Zoological Society of London.

Now Bro-Jorgensen has found a reversal of these stereotypical sex roles with the topi, which dwells in the savannahs and floodplains of Africa.

"Since I was 3 years old I have always been fascinated by the free spirits of the antelopes on the African savannahs," Bro-Jorgensen said. "The African savannah is such a fantastic place to work. You never know what will happen to you over the course of a day—sometimes topi calves playing or narrowly escaping a hyena will make my day; on less fortunate days, car breakdowns have forced me to cross crocodile-infested rivers or come face to face with lions. However, it is all exciting."

In this frisky species of antelope, females each become receptive to sex for roughly one day. This extraordinarily tiny window of time female topi have for sex makes them very promiscuous, leading to "rampant mating," Bro-Jorgensen said. Each female mates with about four males on average during this day.

"Because of this rampant mating, hotshot males get completely knackered during peaks in mating activity," Bro-Jorgensen said. He found that females aggressively struggled over valuable limited supplies of sperm from the most desirable members of the opposite sex. Females even went so far as to attack males when they are with other females, in order to monopolize their time.

At the same time, Bro-Jorgensen discovered that male topi grew pickier about whom they mated with, each deliberately choosing females they had mated with least and launching counterattacks against aggressive females they already mated with.

Such role reversal might be far more widespread than now thought, as topi are in many ways "a very typical mammalian species," Bro-Jorgensen told LiveScience. "We should look out for more such role-reversed conflicts particularly in promiscuous species, but also in situations where all females favor the same few males."

One reason why such role reversal "may have been overlooked so far is that we don't see when males are uninterested in mating because they simply avoid mounting," he explained. "This contrasts with unwilling females who often make spectacular attempts to escape male mounting."

"We should not regard coyness as the only natural female sex role, just as we should not expect that it is always the natural male sex role to mindlessly accept any mating partner," Bro-Jorgensen added. "Nature favors a broader range of sex roles."