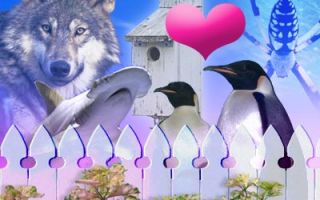 Wild Sex: Where Monogamy is Rare

It might be a treasured value in many human cultures, but monogamy is rare in the animal kingdom at large. Of the roughly 5,000 species of mammals, only 3 to 5 percent are known to form lifelong pair bonds. This select group includes beavers, otters, wolves, some bats and foxes and a few hoofed animals.

And even the creatures that do pair and mate for life occasionally have flings on the side and some, like the wolf, waste little time finding a new mate if their old one dies or can no longer sexually perform.

Staying faithful can be a struggle for most animals. For one, males are hardwired to spread their genes and females try to seek the best dad for their young. Also, monogamy is costly because it requires an individual to place their entire reproductive investment on the fitness of their mate. Putting all their eggs in one basket means there’s a lot of pressure on each animal to pick the perfect mate, which, as humans knows, can be tricky.

Because of recent revelations from animal studies, scientists now distinguish between three different types of monogamy:

• Sexual monogamy is the practice of having sex only with one mate at a time. • Social monogamy is when animals form pairs to mate and raise offspring but still have flings—or "extra-pair copulations" in science lingo—on the side. • Genetic monogamy is used when DNA tests can confirm that a female's offspring were sired by only one father.

For humans, social and sexual monogamy usually go together, but this isn't always the case with other animals. For example, an estimated 90 percent of all birds are socially monogamous, living and raising young together, but many frequently have sex with other partners. One famous experiment found that female blackbirds paired with sterilized males were still laying eggs that hatched. The females couldn't chirp their way out of that one.

Also, animals once regarded as exemplars of faithfulness, such as gibbons and swans, are now known to cheat, abandon and even "divorce" one other, just like humans.

The few animals that do stick together are providing scientists with valuable clues about the biological basis of fidelity. One of the most studied animals in this regard is the mouse-like prairie vole. A male vole will prefer to mate exclusively with the first female he loses his virginity to. And his faithfulness approaches a kind of fanaticism: Far from trying to woo other females, a mated male vole will actually attack them.

In recent years, scientists have traced these unusual behaviors to levels of certain neurotransmitters in the rodents' brains. Interestingly, one of these, dopamine, is also implicated in drug addiction in humans.

Another species that likewise frowns upon infidelity is the black vulture: when extra-pair copulation takes place nearby, vultures will attack the philanderer. Staying together makes for happier vulture babies, since both parents incubate eggs, each taking a 24-hour shift, and for eight months the fledging gets fed by both parents.

While scientists are starting to uncover clues about what causes certain animals to stay loyal to a partner, the underlying reason for monogamy is still an open question. The most commonly accepted explanation is that monogamy evolved in situations where young have a better chance of surviving if both parents are involved in raising them.

This helps explain why humans tend to be monogamous, since human children take so long to mature. This explanation doesn't hold for all animals, however. Male dikdiks, an African dwarf antelope, are sexually monogamous but the males are not very involved in the raising of the calves.

In light of recent revelations that homosexuality and polygamy are rampant in the wild, monogamy might seem like the plain vanilla of sexual lifestyles.

But as the 10 examples in LIveScience's special presentation show, monogamy in the animal kingdom might be rare, but it is anything but boring.