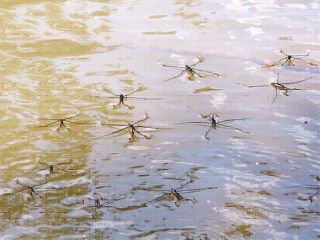 Entomologists have discovered 50 new species of insects in Thailand, some of which are water bugs large enough to eat small fish—and inflict intense bites on curious humans.

Robert Sites and his team have described 12 of the 50 new species so far: Six of the ferocious bugs belong to the same family as water striders, also known as Gerridae, which propel themselves along the surface of water. The other six belong to the family Aphelocheiridae, a group that includes “toe biters,” which dwell in the gravel of streams and hunt for prey there.

Once the bugs locate prey, they stun it with a bite. “It’s much, much worse than a bee or wasp sting,” Sites said. “I was bitten in the pad of my little finger, and I felt intense pain all the way to my elbow for a good 30 minutes.”

After the prey is stunned, the predatory insects whip a straw-like appendage out and pump toxins into their meal, liquefying it from the inside-out. “After that, they suck out the juice,” Sites said.

The bites may be painful, but none are dangerous to humans. “From a scientific perspective, they’re all cool,” Sites said. “They feed on other insects that they can overpower in the streams. Some even eat small fish. They’re pretty ferocious predators.”

Although the bugs are related to other insects around the world, they live only in the streams and waterfalls of the Himalayan Mountain foothills—a region facing growing environmental pressures, Sites said, from locals who clear forests to plant crops, then move on once the soil’s resources are exhausted. “It’s an ongoing problem and a threat to species we haven’t even discovered yet,” Sites said.

Descriptions of three of the new species appear in a recent issue of the Annals of the Entomological Society of America.