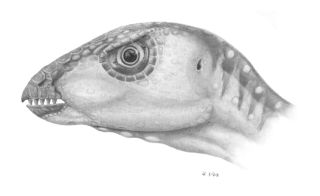 This illustration shows what the Oryctodromeus dino's head may have looked like.
(Image: © Lee Hall)

An underground den of dinosaurs now reveals the first evidence that at least one species of "terrible lizards" could burrow.

The findings, detailed in the March 21 issue of the journal Proceedings of the Royal Society B, suggest dinosaurs could have endured extremes of heat or cold by finding shelter within dens of their own making. They also hint that such burrowing dinosaurs could have even survived the initial brunt of whatever eventually killed most of them off in the so-called K-T extinction some 65 million years ago.

The new dinosaur species is dubbed Oryctodromeus cubicularis, or "digging runner of the lair," explained researcher David Varricchio, a paleontologist at Montana State University. The herbivore possessed a snout that could have shoveled away dirt, as well as large shoulder bones for powerful muscles and strong hips to support the body--all traits possibly evolved for digging.

This "bird-hipped" dino is a member of a large group called Ornithopids, which walked on their hind legs and left behind bird-like footprints showing spread out toes.

Paleontologists first caught hints of the new dinosaur in 2004 in fragments of bone on a hillside off the shoulder of the Rocky Mountains in southwestern Montana. In 2005, they excavated the scattered bones of what appears to be a family consisting of an adult and two juveniles. They apparently dwelled in a den burrowed into mud and clay that later became filled with sand.

The adult was roughly six-and-a-half feet long and probably weighed 50 to 70 pounds. It dwelled 95 million years ago in what were coastal floodplains between mountains and volcanoes to the west and an inland sea to the east that ran from Canada to the Gulf of Mexico. The dinosaurs the researchers discovered seem to have died before they became entombed. What killed them is a mystery.

Curiously, the dinosaur [image] burrow had tinier burrows into its walls "maybe occupied by insects or mammals or other small organisms," Varricchio said. "That gives us a neat window into the ecology back then."

"This is a stellar find," paleontologist David Fastovsky at the University of Rhode Island in Kingston, who did not participate in this research, told LiveScience.

This newfound digging behavior [image] could have aided dinosaurs "to inhabit more extreme environments," Varricchio told LiveScience. "We've had examples of dinosaurs in the Cretaceous living at very high latitudes, close to the North Pole and South Pole. So maybe dinosaurs could burrow to last out the dark winter months."

Such burrows could have even helped dinosaurs sheltered in underground dens to survive the initial effects of the asteroid strike or volcanic eruptions that scientists currently suspect killed the dinosaurs. However, once all the food ran out, "you're going to die," Fastovsky said.

Fastovsky noted that he and his colleagues had discovered a chicken-sized bipedal carnivorous dinosaur in Mongolia that they suspected might have dwelled in a burrow roughly a decade ago, but the team had not followed up on it. "These new findings could help raise the consciousness of researchers to keep an eye out in their digs for such possibilities," he said.

These findings also suggest that bipedal dinosaurs, with their forelimbs freed up from walking, might have been capable of a number of surprising behaviors. "We may not have resolved all that dinosaurs can do," Varricchio said.