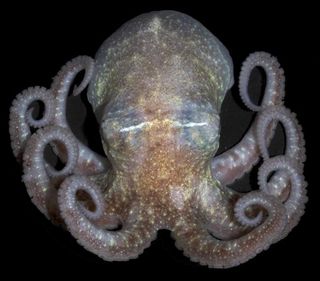 Several strange creatures including a psychedelic octopus have been found in frigid waters off Antarctica in one of the world’s most pristine marine environments.

Others resembled corals and shrimps. At least 30 appear to be new to science, said Julian Gutt, chief scientist of an expedition that was part of the International Polar Year research effort set to launch on March 1. The researchers catalogued about 1,000 species in an area of the Antarctic seabed where warming temperatures are believed to have caused the collapse of overlying ice shelves, affecting the marine life below.

“This is virgin geography,” said expedition member Gauthier Chapelle. “If we don’t find out what this area is like now following the collapse of the ice shelf, and what species are there, we won’t have any basis to know in 20 years’ time what has changed and how global warming has altered the marine ecosystem.”

The expedition also found sea lilies, sea cucumbers and sea urchins thriving on the sea floor—these species are usually found in much deeper waters where food is scarce, but the ice shelves probably made food scarcer than it would usually be at that shallow depth.

Images of the newfound creatures:

In the Weddell Sea off the east coast of the Antarctic Peninsula, 10,000 square kilometers of seabed was sealed off from the surface for thousands of years by the 100-m thick Larsen A and B ice shelves. When these ice shelves collapsed in recent years, the area was opened up to colonization by species that could not have survived there before [Original News Story].

The international team of scientists recently completed a 10-week expedition of the area. Using a remote operating vehicle, they were able to do the first comprehensive survey of life on the seabed. Before the ice shelves collapsed, the only access scientists had to the area was through holes drilled in the ice.

Ice shelves form when creeping glaciers reach the continent’s coast and begin to float on the ocean. They usually lose mass via icebergs that calve off and float out to sea gradually, but the Larsen A and B shelves both suddenly and surprisingly collapsed. Since 1974, a total of 13,500 square kilometers (about half the size of New Jersey) of ice shelves have disintegrated—a phenomenon linked to global warming, as temperatures have risen faster in Antarctica than anywhere else in world.

In general, the expedition found that animals were less abundant in the Larsen A and B areas compared to other areas of the Antarctic. Animals in the area were only one percent as abundant as other parts of the Weddell Sea, which Gutt suspects is somehow related to the availability of food.

One of the main aims of the expedition was to survey both indigenous life-forms and creatures that had moved in after the collapse to take advantage of the newly opened environment.

Gutt said that 95 percent of the animals the expedition found were probably indigenous and just 5 percent had moved in after the ice shelves collapsed, but even that small percentage indicated a shift in biodiversity and species composition in the area which will probably continue.

“Life at the sea floor obviously reacts very slowly to this very climactic change in the environmental conditions," Gutt said. “[It] needs hundreds to thousands of years until a new community has fully developed, if this will happen at all.”

One creature new to the neighborhood was the fast-growing, gelatinous sea squirt, which the scientists found in several dense patches.

The expedition also found scours created by icebergs that calved from the ice sheets and ran aground on the sea bed, destroying the life in the area, but the damage wasn’t as bad as expected.

“I expected more, because if there are thousands of icebergs disintegrated, or calved, in a very short period of only a few months, then I expected that everything would be destroyed. But it was not,” Gutt said.

The expedition actually found more evidence of disturbance outside the Larsen ice shelf area at points where many icebergs must pass.

But in the areas icebergs had destroyed, Gutt said, signs of life were returning.