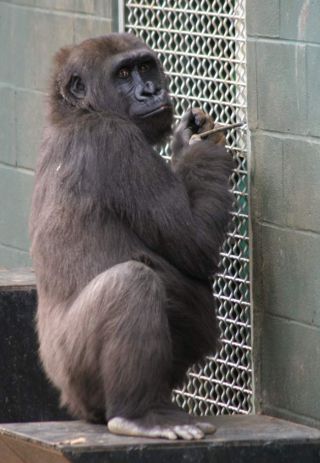 A female gorilla at Zoo Atlanta using a stick to probe for food that is out of her reach. Of the four groups residing at Zoo Atlanta, this behavior was performed by the majority of group members in one group but rare or completely absent in the other three groups. Adam Thompson/Zoo Atlanta

They may not take in the opera or sip fine wines, but the verdict is in: apes are cultured.

Fifty years of research on gorillas, chimps and orangutans has shown they use tools, communicate, and sometimes shake their hands just because it’s cool.

Ecologist Kinji Imanishi first introduced the concept of culture in a non-human species in 1952. He suggested that Japanese macaque populations develop behavioral differences as a result of social, rather than genetic, variation.

Since then, scientists have claimed that a wide range of species exhibit signs of culture, including rodents, birds, fish, marine mammals, and non-human primates. Of all the species studied to date, only humans exceed the level of cultural variation shown by chimps.

Prominent researchers like Jane Goodall and Dian Fossey spent much of their time quietly observing animal behaviors. Yet studies accumulated from the 1980s and ’90s are patchy because many observations went unpublished.

But solid evidence has accumulated recently.

Last August, scientists confirmed culture in chimps in a study published in the journal Nature. They found chimps naturally copy their peers well into adulthood, suggesting they develop cultural behaviors by imitating each other.

“Ape cultures are real. I think it’s time to stop doubting that they exist,” said primatologist Carel van Schaik from the University of Zurich.

Van Schaik presented his findings on orangutan culture with Zoo Atlanta primatologist Tara Stoinski at the annual meeting of the American Association for the Advancement of Science in St. Louis earlier this month.

Armed with previous field research, as well as new studies from wild orangutans and captive gorillas, researchers have more evidence to explain the variation and transmission of cultural behaviors in apes. Scientists are now focusing on the details of cultural behaviors and how apes adopt them as tradition.

Like us, apes are influenced by popular opinion. Scientists have observed cultural traditions that last for generations, and some that look more like short-term trends.

Traditions between groups vary, similar to human cultural differences. In the wild, one group of orangutans living by a river pounds stones and branches to crack open nuts.  Living just across the river are apes that, by chance, haven’t picked up the nut-cracking technique.

Cracking nuts is one of more than 40 behavior patterns scientists have observed that does not appear to have any genetic explanation.

Cultural behaviors stem from popularity, the environment the apes are in, and pure chance. So what makes one group more cultured than the next?

“The answer is very simple,” van Schaik told LiveScience. “How much there is to eat.”

Apes like being with other apes; orangutans will actually suppress aggression when in groups. Even bullies will chill out so they don’t pass up an opportunity to play with others.

Yet food shortages force individuals to spend lots of time foraging on their own. The less time an ape can spend with others, the fewer behaviors it can learn.

The size of the local cultural repertoire relates directly to the amount of time spent with other animals, van Schaik said.

Orangutans live in areas with less food than chimps, which explains why cultural behaviors in orangutans tend to be less elaborate than those of chimpanzees.

“We expect an animal to socialize if they can,” van Schaik said.

In zoos, apes have access to all the food they need and plenty of socializing. But information collected from 25 captive gorilla groups by Stoinski and her Zoo Atlanta research team shows that the culture of healthy apes is not always equal.

The number of cultural behaviors varied dramatically between gorilla groups, even when animals lived at the same zoo.

The four groups of gorillas at Zoo Atlanta have four different kinds of behaviors. A female gorilla in one group, for example, will use a stick to probe for food that is out of her reach.  The stick probing behavior was common in one group but rare or completely absent in the other three groups.

Some groups could have more traditions than others because they are more social, said Stoinski. When gorillas get along well, they’re more likely to learn from their fellow friends.

“As for why there are differences in the degree of 'culturalness' between groups, at this point we don't know, but my guess is that it is related to the degree of social cohesion, and thus opportunities for social learning, in the group,” Stoinski said.

Forming groups of captive gorillas that get along is a tricky business.

Often, zoos move individuals from one group to another to maintain genetic diversity among captive populations.  Zookeepers act as genetic matchmakers, and cross their fingers that temperaments match, too.

“We try to take into account personality when we move gorillas within groups,” Stoinski said. “However, it’s not always possible. Some groups just gel better than others.”

Stoinski and her team will continue to research the variety of cultural behaviors with the four groups at Zoo Atlanta.

If she finds additional evidence that the more social groups have the most behaviors, “it very much supports the idea that social tolerance is an important facilitator of cultural transmission and thus culture.”