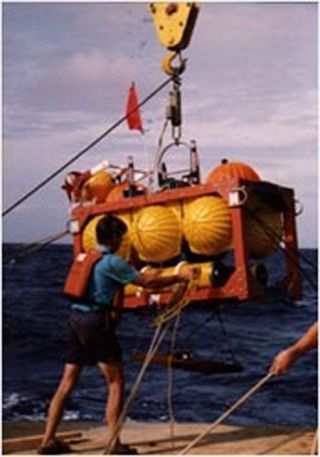 An ocean bottom seismometer, or OBS, like this one will be deployed in 2007 on the East Pacific Rise.
(Image: © Woods Hole Oceanographic Institution)

Predicting major earthquakes, at least the type that produce tsunamis, may get a little easier with knowledge gleaned from a new study of past events.

By monitoring small seismic shocks on the ocean floor, scientists may be able to generate an "undersea earthquake forecast." The forecast would alert seismologists of an impending earthquake hours, or even minutes, before it strikes.

In general, earthquake prediction is a very challenging task. Though a lot of research has gone into the problem, no firm prediction ability exists. The best geologists can do is foresee events likely to occur along a certain fault in coming months or years.

"Some scientists believe that earthquakes come on suddenly with no warning signs, and the big ones are therefore unpredictable," said Thomas Jordan of the University of Southern California Earthquake Center. But in some parts of the ocean, Jordan maintains, predictions appear possible.

In fact, Monday's 8.7-magnitude earthquake was predicted by one group of scientists. Yet it did not cause the tsunami many experts expected. Researchers are puzzled as to why, and the whole event illustrates the challenges of forecasting.

Jordan and his co-researchers studied data gathered from past earthquakes occurring along five faults on the East Pacific Rise - a region whose tectonic plates are spreading apart at a rate of five inches a year.

They defined a "foreshock" as any shaking of at least a magnitude 2.5, and the main shock of a temblor as being a 5.4 event or greater. To generate a hypothetical foreshock "alert," they looked for rumblings occurring within a 10-mile radius of the quake's eventual epicenter within the hour before the actual quake struck.

Using this model, six of the nine major quakes along the East Pacific Fault from 1996 to 2001 could have successfully predicted, the researchers wrote in the March 24 issue of the journal Nature.

This method of predicting quakes is not as useful for land earthquakes since they are generally not preceded by these types of foreshocks, other research indicates.

Better instrumentation on the seafloor could lead to better predictions.

Work remains before any official predictions could be made. And questions remain about the fickle nature of Earth's shifting crust, which does not behave the same in the various spots where broken plates meet.

"If both foreshocks and mainshocks are triggered by an earlier event, which could be a gradual slipping along a fault line, technically known as an aseismic slow slip transient that doesn't create seismic waves, then it could be detected with the right instruments," said Jeffrey McGuire of the Woods Hole Oceanographic Institution and coauthor of the paper on the study.

Scientists have detected deep sea slow slip transients in subduction zones, where one tectonic plate is shoved under another. Such events have been detected off Japan and along the Cascadia Fault off the Pacific Northwest, but these events did not trigger massive earthquakes.

Large networks of sensors, like those in place on the San Andreas Fault, can detect these slow-moving events. Now scientists want to set up a similar system on undersea faults.

McGuire will head an expedition in 2007 to place new sensors on the East Pacific Rise. Seismologists believe that an extensive network of sensors on the ocean floor may help spot a brewing undersea earthquake.

Subsea quakes can cause tsunamis, and even 15 minutes of warning could save lives.