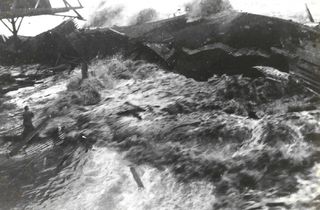 There are only two places in the United States where colliding tectonic plates could cause a major tsunami, and new studies show a new earthquake in at least one of these locations could be imminent.

The Cascadia subduction zone, a 680-mile fault that runs 50 miles off the coast of the Pacific Northwest -- from Cape Mendocino in California to Vancouver Island in southern British Columbia -- has experienced a cluster of four massive earthquakes during the past 1,600 years. Scientists are trying to figure out if it is about to undergo a massive shift one more time before entering a quiescent period.

The historical record for this zone, which has the longest recorded data about its earthquakes of any major fault in the world, shows that earthquakes occur in clusters of up to five events, with an average time interval of 300 years between quakes, said Chris Goldfinger, a marine geologist at Oregon State University. Goldfinger and other scientists have been studying this subduction zone for many years.

The two most recent quakes on this fault occurred in the year 1700 (a magnitude 9 event) and approximately the year 1500. It has now been 305 years since the last event. So is the Cascadia subduction zone finished for now or on the brink of event number five?

"We know quite a bit about the periodicity of this fault zone and what to expect," he said. "But the key point we don't know is whether the current cluster of earthquake activity is over yet, or does it have another event left in it."

At the Cascadia subduction zone, an oceanic tectonic plate called the Juan de Fuca is pulled and driven (subducted) beneath the continental North American plate, setting up conditions for undersea "megathrust" earthquakes.

The Cascadia subduction zone occurs where the relatively thin Juan de Fuca plate moves eastward and under the westward-moving North American Plate. When that collision results in a rupture, massive earthquakes occur. The other active subduction zone capable of producing a major earthquake-tsunami sequence is in Alaska, the site of a giant earthquake and subsequent tsunami in 1964.

Scientists say a rupture along the Cascadia fault would cause the sea floor to bounce 20 feet or more, setting off powerful ocean waves relatively close to shore. The first waves could hit coastal communities in 30 minutes or less -- too rapidly for the current warning systems to save lives.

A tsunami along the Atlantic Coast is considered extremely unlikely.

Tsunamis are the result of sudden rises or falls in a section of the earth's crust under or near the ocean, usually caused by earthquakes, volcanic activity or landslides. Earthquakes at subduction zones (rather than at other types of faults such as thrust faults) produce the highest energy tsunamis, especially when they occur in deep water. The seismic activity displaces sea water, creating a rise or fall in the level of the ocean above. This rise or fall in sea level initiates the formation of a tsunami wave. The wave's height increases in shallower water.

Geologists can track earthquakes back in time by radiocarbon dating deposits of sand called turbidites, which come from undersea landslides.

Major studies on the Cascadia fault zone have identified 19 to 21 major earthquake events during the past 10,000 years. During at least 17 of these events, the entire fault zone probably ruptured at once, causing an earthquake around magnitude 9 and major tsunamis, such as those which savaged East Asia last week.

The Asian event happened where the India plate was subducted beneath the Burma microplate. It ruptured, for the first time since 1833, along a 600-mile front just about the same length as the Cascadia Subduction Zone.

The Asian event may provide a shocking demonstration of the geologic future of the Pacific Northwest, Goldfinger said. For hundreds of years, subduction zone plates remain locked in place, releasing little tension. Every few centuries, in a few minutes of violence, forces are released as the upper plate moves seaward, producing a massive tsunami following earthquake shaking.

"In the case of the Cascadia Subduction Zone, you could have an area of ocean floor that's 50 miles wide and 500 to 600 miles long suddenly snap back, causing a huge tsunami," Goldfinger said. "At the same time, we could expect some parts of the upper, or North American, plate to sink one to two meters. These are massive tectonic events. Subduction zones produce the most powerful earthquakes and tsunamis in the world."

The question is not whether, but when the Cascadia Subduction Zone will break again.

"One possibility is that we could be done with this cluster and looking at a period of many hundreds of years before the next earthquake," Goldfinger said. "The other distinct possibility is we could still be in a cluster of events. If that's the case, the average time interval between earthquakes within a cluster is already up. We would be due just about any day."

The Associated Press contributed to this report

Earthquakes Stopped, But Only In Lab