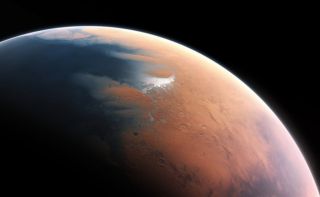 This artist’s impression shows how Mars may have looked about 4 billion years ago when almost half the planet’s northern hemisphere could have been covered by an ocean up to a mile (1.6 kilometers) deep in some places.
(Image: © ESO/M. Kornmesser)

Three and a half billion years ago, a blood-red wall of water as tall as a skyscraper may have hurtled across the surface of Mars, inundating an area of land larger than the United States.

Two separate groups of astronomers first put forth the controversial theory in 2016. Their idea was based on "fingerprints" of massive wave action left behind on the Martian landscape — the huge fields of boulders carved with rivulets, potentially left behind as the waves retreated back over the landscape.

Now, astronomers have another piece of evidence for such a tsunami. An enormous asteroid struck Mars just before waves, most-likely colored red due to the copious dust on the surface of Mars, inundated the planet. That collision have been ground zero for the "mega-tsunami." [The 7 Most Mars-like Places on Earth]

Francois Costard, an astronomer at the French National Centre for Scientific Research and among the first scientists to propose the tsunami theory, traced the wave's path of destruction across the Martian landscape. His goal: to find a point of origin.

Scientists already suspected that an asteroid collision caused the possible massive tsunami. So, Costard and his colleagues narrowed the search down to 10 craters whose size and location made them possible origin spots. All models pointed toward one of those craters: Lomonosov, a 90-mile-wide (150-kilometers) scar in the Martian landscape.

There are plenty of reasons that the Lomonosov crater makes sense as ground zero, Alexis Rodriguez, a scientist at the Planetary Science Institute and a co-author of the study, told Live Science. The cavity is around 3 billion years old — the same age as the geographic "thumbprint" left behind by the possible tsunami. The edges of the crater are eroded, as though water rushed back into the hole following a massive impact. And models suggest that the collision was strong enough to trigger a mega-tsunami capable of engulfing the planet.

But there's a problem with that theory. It's not yet clear whether an asteroid caused a tsunami in the first place, Rodriguez said. It's possible that scientists are barking up the wrong tree.

"My personal opinion is that this assumption is not correct," Rodriguez said.

Astronomers agree that ancient Mars was a much warmer, wetter place. But at the time of the alleged tsunami, Mars wasn't exactly a blue, Earth-like orb. Its atmosphere had disappeared and the red planet was rapidly turning into a frozen red ball. While there was still plenty of water left on Mars at that time, it was mostly underground. The water that is claimed to have pummelled the planet in waves would have been the result of catastrophic flooding — as if one of the underground aquifers had broken. That sea only took anywhere between 10,000 and hundreds of thousands of years to freeze, Rodriguez said, which means that the window of opportunity for a massive asteroid to hit and trigger a tsunami was brief, "geologically" speaking. The problem is that massive asteroids only hit Mars once in a blue moon, every several million years, Rodriguez said.

The probability of those two events coinciding — the asteroid strike and aquifer breakage — is incredibly low, Rodriguez said.

Rodriguez, who was one of the first scientists to propose the theory of ancient Martian tsunamis, believes that there's good evidence that the tsunami happened, but thinks more research is needed to confirm the cause. For instance, evidence has emerged that shows landslides were shaping the Martian landscape at the time of the tsunami, and might have caused the wave. Other potential causes include an earthquake or a deep-sea volcanic eruption.

Rodriguez and his colleagues haven't produced a perfect answer yet, but they're working on it.

"This is a work in progress," he said. And for now, Lomonosov fits the bill.