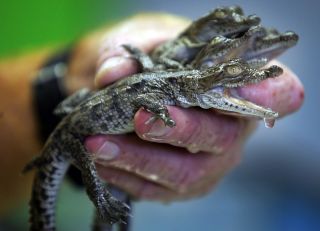 Hundreds of crocodiles make their home in a network of canals in southern Florida. These channels also happen to carry water that cools a nearby nuclear power plant.

But don't worry — these crocodiles aren't mutants, monstrous or radioactive. In fact, the reptiles are thriving in these waters. American crocodiles (Crocodylus acutus) were formerly edging toward extinction, but their numbers have multiplied enough to elevate their federal status from "endangered" to "threatened" in 2007.

And scientists want to keep it that way. A team of experts with the Florida Power & Light (FPL) recently collected 73 crocodile hatchlings from canals near the FPL Turkey Point Nuclear Generating Station, located near Biscayne National Park. Biologists will implant the baby crocs with microchips, to help researchers continue monitoring the health of the croc colony, the Associated Press (AP) reported. [Alligators vs. Crocodiles: Photos Reveal Who's Who]

Several hundred crocodiles now inhabit Turkey Point canals, CBS Miami reported. To ensure the crocodile population's continued growth and success, FPL biologists visit the canals every year between January and April to build nesting sites for crocodile mothers. Months later, hatchlings are caught, measured and microchipped, and then are redistributed among the canal network — which spans 168 miles (270 kilometers) — which offers the babies a better chance of survival than being released together in the same spot, according to the AP.

Since the conservation and monitoring program began, the "Croc Team" has tagged more than 7,000 crocodiles, FPL representatives reported. In addition to microchipping hatchlings, scientists also construct ponds to protect the young from predators, and conduct surveys to track the health and growth of the canal-dwelling crocodiles, according to FPL.

American crocodiles are native to southern Florida, which is the northernmost part of their range; they are also found in coastal regions in South and Central America, and in the Caribbean Sea. These reptiles can grow to be 20 feet (6 meters) long and weigh more than 2,000 lbs. (907 kilograms), though individuals in U.S. breeding populations tend to be somewhat smaller than that, according to the U.S. Fish and Wildlife Service (FWS).

Human activity destroyed much of the crocodiles' estuary habitats during the early part of the 20th century, causing their decline. The FWS classified the species as endangered in 1975, but construction of the Turkey Point canals brought an unexpected reprieve to the beleaguered reptiles.

The project created berms — elevated strips of land bordering the canals. This inadvertently provided the animals with a new nesting habitat, and the species began to recover, researchers with the University of Florida reported in a 2006 conference presentation.

Females typically lay between 20 and 60 eggs, but few of them grow to be adults: Most of the defenseless hatchlings are eaten by fish, gulls, wading birds and crabs, the FWS says. Fortunately for the Turkey Point crocodiles, one predator they don't have to worry about at this location is people, as the site is remote enough to protect the crocodiles from human hunters, the AP reported.

But how safe is the water in those cooling canals? In March, the Nuclear Regulatory Commission’s Atomic Safety and Licensing Board said that it would hear arguments over whether these canals — which contain ammonia — could harm the nesting crocodiles or other threatened and endangered animals, according to a report in the Miami Herald.

The waterways also seem to have elevated levels of tritium, a radioactive isotope of hydrogen, which could be leaking into the adjacent Biscayne Bay, according to a study released by the Miami-Dade County Mayor Carlos Gimenez in 2016, as reported by the Miami Herald.