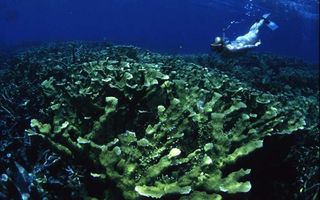 Climate change is killing the world's coral reefs. But it's not the only factor turning them into white, dead husks. According to a new study, all the chemicals humans are dumping into the ocean are making it easier for the hotter weather to do its deadly work.

The research paper, published online Monday (July 15) in the journal Marine Biology, is based on data collected over three decades from the Looe Key Sanctuary Preservation Area in the Florida Keys. Coral coverage declined from 33% in 1984 to just 6% in 2008 in that sanctuary. Even as temperatures have trended upward globally, average local temperatures didn't change much during the study period. This allowed researchers to disentangle a number of different problems sickening (or "bleaching") the reef.

First, the researchers found, bleaching events — due to the loss of algae called zooxanthellae that give coral their color — did tend to occur once water temperatures had spiked above a threshold of 86.9 degrees Fahrenheit (30.5 degrees Celsius). Such a spike occurred 15 times in the period covered in the study (between 1984 and 2014). [In Photos: Diving in a Twilight Coral Reef]

Second, and significantly, the ratio of nitrogen and phosphorus in the water turned out to be a key factor in determining when and to what extent coral bleached. When Florida rains caused agricultural fertilizers containing nitrogen and phosphorous to run off into the ocean, coral death was more common. Those increased nutrients in the water caused algae blooms, which in turn seemed to predict mass coral deaths. Nitrogen, in particular, turned out to be the most important factor related to mass coral bleaching.

This study didn't examine the mechanism by which nitogren leads to bleaching, said Brian Lapointe, lead author of the paper and a researcher at the Harbor Branch of Florida Atlantic University. But other research by scientists studying the Great Barrier Reef has shown why and how it happens, he told Live Science.

As the nitrogen-phosphorous balance in the ocean gets out of whack, certain membranes in the coral start to break down. The coral can't get enough phosphorous, he said, leading to "phosphorous limitation and eventual starvation."

"It degrades the ability of these organisms to survive high light and high temperatures," Lapointe said. "It actually reduces their light and temperature thresholds."

A great deal of the effect of these added nutrients could be mitigated by improved water-treatment plants, the researchers noted. Most of the nitrogen in runoff doesn't pour right off the land into the sea during rainstorms, but instead passes through water-treatment plants that fail to remove the chemical.

In Dutch-controlled regions of the Caribbean, the researchers noted in a statement, improved sewage-treatment plants do pull nitrogen out of the water. And in those places, coral reefs are faring better than they are off the coast of Florida, the scientists pointed out.

Coral isn't just a necessary foundation of thriving marine ecosystems, the researchers said in their statement. Reefs also directly contribute $8.5 billion each year and 70,400 jobs to the Florida economy, according to the Florida Keys National Marine Sanctuary.

"Citing climate change as the exclusive cause of coral reef demise worldwide misses the critical point that water quality plays a role, too," James Porter, an emeritus professor of ecology at the University of Georgia and a co-author of the paper, said in the statement. "While there is little that communities living near coral reefs can do to stop global warming, there is a lot they can do to reduce nitrogen runoff. Our study shows that the fight to preserve coral reefs requires local, not just global, action."