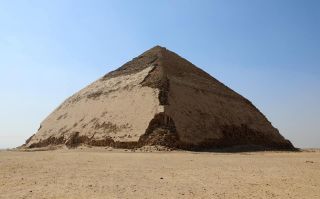 For the first time since 1965, two pyramids built by the ancient Egyptians, including the unique "Bent Pyramid," are being opened to the public, according to the Egyptian Ministry of Antiquities.

The two pyramids — the Bent Pyramid and its satellite in the Dashur royal necropolis — sit about 25 miles (40 kilometers) south of Cairo. Both are more than 4,000 years old.

Along with the announcement, made Saturday (July 13), the ministry revealed its latest discoveries of stone, clay and wooden sarcophagi, some of which contained mummies with wooden funerary masks. The findings also included stone-cutting tools dated to the Late Period, which lasted from 664 B.C. to 332 B.C., or about the time of Alexander the Great. [Photos: Exquisitely Preserved Ancient Tomb Discovered at Saqqara]

The Bent Pyramid, built in about 2600 B.C. by the Pharaoh Sneferu during the Old Kingdom, is a one-of-a-kind structure. Archaeologists note that its architecture is a transition between the Djoser Step Pyramid, built between 2667 B.C. and 2648 B.C., and the Meidum Pyramid, which also dates to 2600 B.C., Antiquities Minister Khaled al-Anani said in a statement.

The pyramid almost looks like its shedding: the bottom half is still covered with its original limestone casing. The sides rise at a streep 54 degrees angle, but later tapers off at a 43 degree angle toward the top, giving it a "bent" look.

"Sneferu lived a very long time … the architects wanted to reach the complete shape, the pyramid shape," Mohamed Shiha, director of the Dahshur site, said, according to The Guardian.

"Exactly where he was buried, we are not sure of that. Maybe in this [Bent] pyramid, who knows?" Shiha said.

The Bent Pyramid, as well as the other pyramids in the Dashur royal necropolis (a part of the Memphis necropolis), are registered as World Heritage sites with the United Nations Educational, Scientific and Cultural Organization (UNESCO).

The ministry's project department restored the 331-foot-tall (101 meters) Bent Pyramid and its satellite during their closure. Some of this restoration process included work on the internal and external stairs, the addition of a lighting network, and the repair of some of the stone work in the corridors and burial chamber.

In addition, the ministry announced that its archaeologists had found the remains of an ancient wall that dated to the Middle Kingdom, about 4,000 years ago. This nearly 200-foot-tall (60 m) wall sits south of another pyramid from the 12th dynasty pharaoh King Amenemhat II, which is also in the Dahshur necropolis.

In recent years, Egypt has announced archaeological discoveries with the hope of increasing tourism, which took a hit after a 2011 uprising against the Egyptian government.