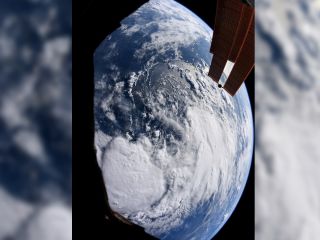 As of 11 a.m. ET, Barry was moving northwest in the Gulf of Mexico at 6 mph (9 km/h), and its eye was about 40 miles (65 kilometers) south of Lafayette, Louisiana, and about 50 miles (80 km) west of Morgan City, Louisiana. Hurricane forecasters expect the hurricane to lose strength over the next few hours, getting downgraded back to a tropical storm.

The National Oceanic and Atmospheric Administration (NOAA) has issued a hurricane warning from Louisiana's Intracoastal City to Grand Isle, meaning hurricane conditions are expected somewhere in that area over the next 36 hours or so.

"A lot of rainfall still yet to come out in the Gulf of Mexico," NOAA National Hurricane Center director Ken Graham said during a Facebook Live at 11 a.m. ET. The rainfall will then start to impact portions of Louisiana, including New Orleans, he said.

Because of the high winds, there's a chance of tornadoes spinning off Barry. "A few tornadoes are possible through tonight across the southeast Louisiana, southern Mississippi and southern Alabama," according to NOAA's forecast.