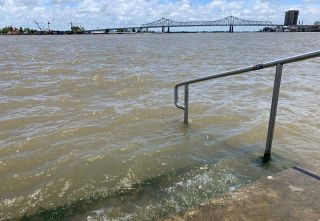 The Mississippi River laps at the stairs on a protective levee in New Orleans as Tropical Storm Barry approaches on July 11, 2019.
(Image: © MICHAEL MATHES/AFP/Getty Images)

New Orleans is bracing for a tropical storm that is expected to hit tonight or tomorrow, bringing with it chances of severe flooding.

Tropical Storm Barry is slowly moving west-northwestward toward the southeastern coast of Louisiana, according to an advisory from the National Oceanic and Atmospheric Administration. The storm's center is expected to hit the southeastern coast of Louisiana, including New Orleans, tonight or Saturday (July 13) and then continue on to the lower Mississippi Valley on Sunday.

It will bring "dangerous storm surge, heavy rains, and wind conditions," across the north-central Gulf Coast, according to NOAA. (A storm surge means that there is a danger of life-threatening floods from rising water moving inland from the coastline, NOAA officials wrote.) [Aftermath of a Storm: Images from Hurricane Katrina]

They expect the storm will bring "dangerous, life-threatening flooding," with 10 to 20 inches (25 to 50 centimeters) of water accumulation in southeast Louisiana and southwest Mississippi. Louisiana is currently under a federal declaration of emergency.

Currently, maximum winds remain around 50 mph (85 km/hr). But there is a chance that Tropical Storm Barry will intensify and turn into a hurricane — once winds hit 74 mph (119 km/h) — tonight or early Saturday when its center strikes the Louisiana coast, according to NOAA.

Some of New Orleans sits below sea level, as if at the bottom of a bowl, and is thus prone to flooding. Fourteen years earlier, Hurricane Katrina brought flooding that devastated the area. In the years following, an extensive hurricane protection system of levees and pumps was put in place, but it isn't yet complete, according to the AP.

The pumping system is working; it's just unclear if it can pump out water faster than Barry will dump it onto the low-lying area, New Orleans Mayor LaToya Cantrell told the AP. What's more, the Mississippi River is already at a high level from heavy rain and snowmelt; the additional water from the storm could lead to dangerous flooding, Louisiana Gov. John Bel Edwards told the AP.