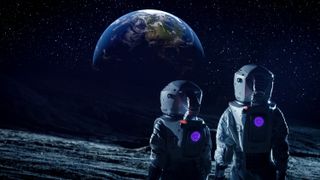 There would be a sweet view of Earth from the moon.
(Image: © Shutterstock)

If you lived on the moon, you'd have to give up lots of things you take for granted on Earth. The feeling of your feet planted firmly on the ground. Your ability to breathe outside without a helmet. And your night-sky view.

Humans have spent millennia staring up at the moon, watching it rise and set, charting its phases as it grows and shrinks each month. But from the viewpoint of the moon, how would the Earth look hanging in the sky?

Well, first, that depends on where you're standing. [How Does a Black Hole Form?]

The moon is tidally locked with Earth, meaning the moon's orbital period matches its rotational period. It takes about a month for both the moon to orbit Earth and for the moon to rotate on its axis. Effectively, this means that the same side of the moon always facing our planet. That's why when you peer through a telescope, the craters and other features on the surface of the moon are always in the same place.

The first humans who directly saw the far side of the moon, that is, the side that's always facing away from Earth, were the Apollo 8 astronauts.

If you were camped out on the far side of the moon, you'd never have a view of Earth. If you were based on the near side, you'd see Earth all the time. And Earth would indeed appear to go through phases over the course of about a month, directly opposite to the lunar phases people on Earth would be witnessing, said Phil Nicholson, professor and deputy director of the Cornell Center for Astrophysics and Planetary Science in Ithaca, New York.

Lunar phases occur because one-half of the moon is always lit up by the sun. The month-long cycle of waxing and waning that we see is just the long lunar day turning into night as the moon orbits Earth.

While Earthlings stare at a darkened new moon (when the side of the moon facing Earth is not lit up by the sun), a lunar observer would be looking at a "full Earth," the half of the planet totally illuminated by the sun. Over the following two weeks, moon dwellers would see a shrinking crescent of Earth until the moon was directly facing the darkened nighttime side of the planet. At that point, Earthlings would be basking in the light of the full moon. To a person standing on the moon, this full moon's reflected light (and maybe some artificial light) might make the new Earth faintly visible.

"It wouldn't just look dark," Christine Shupla, the education and public engagement manager at NASA's Lunar and Planetary Institute, told Live Science. "You would see potentially lights on the Earth in cities."

Your view of Earth, however, might not be crystal clear. If the part of the moon you're on is experiencing day, your observations of the cosmos might be affected by the sun glaring off your helmet or moon rocks, Shupla noted. But because the moon has no atmosphere, you would still be able to look at the stars during the day.

"While the Earth goes through phases, it doesn't actually move in the sky," Nicholson told Live Science. "It wobbles backwards and forwards a little bit because of the moon's elliptical, but it doesn't rise and set like the moon does for the Earth." So if you were standing in what we perceive as the middle of the lunar disk, the Earth would always appear to be directly overhead.

However, from the moon, you wouldn't always see the same features of Earth. You'd notice different features as the planet spins.

The question also got Nicholson thinking about what sort of eclipses you'd see from the moon.

"If you were living on the moon, it'd be easier to see solar eclipses because the Earth is so much bigger," he said. What we call a lunar eclipse (when the moon is in the shadow of Earth) would be a solar eclipse from the perspective of the moon. These would occur two or three times a year. And when a solar eclipse occurs from the viewpoint of Earth (like the 2017 eclipse that was visible over a large stretch of North America), maybe with the help of a telescope, you'd be able to watch the moon cast its large shadow across Earth.

Editor's Note: This story was updated to fix the definition of a lunar eclipse.