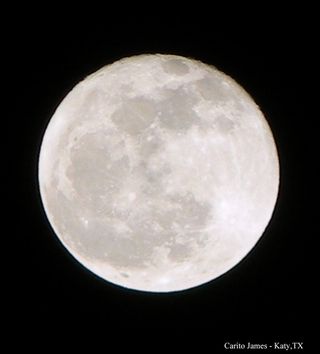 For millennia, humans have kept track of time by observing the changing face of the moon. In fact, you may have noticed that the word "moon" shares its first few letters with the word "month" — and that's no coincidence.

The phases of the moon — new moon, first quarter, full moon and last quarter — repeat themselves about once every month. But why does the moon have phases at all? To answer this question, it's necessary to understand two important facts. First of all, the moon revolves around the Earth once every 29.5 days. And secondly, as the moon carries out its voyage around the planet, it's lit from varying angles by the sun.

One half of the moon is always illuminated by the sun. But here on Earth, we can't always see the half of the moon that's lit up. What we call the phases of the moon represent the different fractions of the moon's lighted half that we can see as the moon circles the Earth. [See this infographic on Moon Phases]

Between the new moon and the full moon, the moon is a crescent (less than half illuminated). It then waxes — grows bigger — into a half-moon (half-illuminated). The first half moon after the new moon is called the first quarter because at that point, the moon is one-quarter of the way through its monthly cycle of phases. After the first quarter comes the gibbous moon (more than half illuminated) and finally a full moon.

This cycle of phases then repeats itself in reverse. After a full moon, the moon wanes — becomes smaller — into a gibbous moon, a half-moon (also called last quarter), a crescent and finally a new moon.

Just before and just after the new moon, when a slim crescent of the moon is lit, you can also see the rest of the moon lit dimly. This owes to sunlight that bounces off the Earth and illuminates the otherwise dark portion of the moon that’s facing us, an effect known as "earthshine."

The major phases of the moon — new moon, first quarter, full moon, last quarter and next new moon — occur, on average, about 7.4 days apart. If you need some help tracking these phases yourself (or if you want to see where the moon was on an important day in history), NASA provides an online calendar of the dates and times of all phases of the moon for the six thousand year period between 2000 BCE to 4000 CE.

NASA's Night Sky Network, a coalition of amateur astronomy clubs from around the U.S., also provides information that may be helpful to those who want to know more about the phases of the moon and the solar system in general. This activity, provided by the Astronomical Society of the Pacific, demonstrates why the moon has phases.

More information about why the moon has phases: