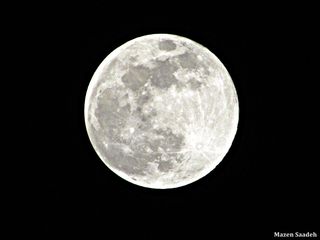 You know that Earth would be a dismal place without its bright, shining neighbor — the sun. But did you know that the moon would also be just another dull orb if not for the sun's rays?

The moon shines because its surface reflects light from the sun. And despite the fact that it sometimes seems to shine very brightly, the moon reflects only between 3 and 12 percent of the sunlight that hits it.

The perceived brightness of the moon from Earth depends on where the moon is in its orbit around the planet. The moon travels once around Earth every 29.5 days, and during its journey, it's lit from varying angles by the sun.

The moon is at its brightest when it is 180 degrees away from the sun from our perspective (picture the sun, Earth and moon in a straight line). At this time, the full half of the moon's surface facing the sun is illuminated and is visible from Earth. This is what's known as a full moon. [Gallery: The Fantastic Full Moon]

At "new moon," on the other hand, the moon isn’t even visible from our vantage point. This is when the moon is between the sun and the Earth, so that the side of the moon reflecting sunlight is facing away from Earth.

In the days before and after a new moon, we’ll see a sliver of the moon reflecting sunlight. And during those times, the faint brightness of the rest of the moon — the part not brightly lit as a sliver — is a result of what scientists call "earthshine," in which the moon’s relatively dark disk is slightly illuminated by sunlight that reflects off of Earth, then off the moon, and back to our eyes.

More information about why the moon shines: