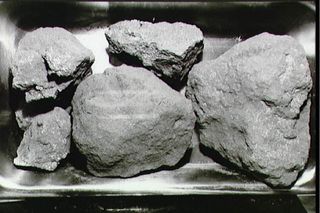 In 2002, Thad Roberts was a 25-year-old intern at NASA's Johnson Space Center in Houston, Texas. Like so many young lovers, he had promised his girlfriend the moon. Uniquely, he decided to actually deliver on the promise, and stole 17 pounds of moon rocks from the space agency that had been brought back to Earth by Apollo astronauts. He got caught selling the rocks on the Internet.

The stunt landed Roberts in prison for 100 months. Not willing to let his NASA experience or undergraduate degree in astrophysics go to waste, he spent his time behind bars contemplating the greatest mysteries of the universe, and conceived a theory to explain them. According to Roberts and his followers, quantum space theory (QST) could unify Einstein's general relativity with quantum mechanics at long last.

Robert's extraordinary story is chronicled in a new book by Ben Mezrich called "Sex On the Moon" (Doubleday 2011), which hit stores July 12. The title refers to the fact that, immediately after his out-of-this-world heist, Roberts and his girlfriend scattered the stolen moon rocks across his bed and had sex on them. Sounds ... comfortable. [Americans' Beliefs in Paranormal Phenomena (Infographic)]

We caught up with Roberts to ask about his colored past, his bold theory and his outlook for the future. 1. On your website, you have an amazing list of things you've done. Among them, what do you consider the most amazing or rewarding of all, and why? I don't consider anything I've done particularly extraordinary. Many people have accomplished and experienced far more than I have. Goal lists are about mutual inspiration. Every time someone is inspired to dream big, the world becomes a richer, fuller place. I encourage everyone to make their own active list of dreams and goals, to share those goals openly with everyone in their lives and to spread their wings by checking each item off one-by-one. Positive-minded people love to see others accomplish their dreams. The best way to expand our horizons is together. [Read: How Far Away is the Horizon?] What was it like to possess those moon rocks? Was the experience worth the consequences? Time is the most valuable asset of the human experience. I, like many others, am filled with awe when I reflect upon how those rocks demonstrate humanity's limitless potential, or when I ponder the romantic expression that they poetically embody. But that awe does not live within those rocks. It belongs to all of us. From experience I can say that there are more appropriate, and more productive, ways to come face-to-face with our magnificent insignificance than stealing a piece of the moon. You can ponder the vast reaches of space and time as you peer through a telescope at Orion's Great Nebula, or you can simply breathe in the experience of being in love. Whatever you do, don't repeat my mistakes. [Read: Why Do We Have Sex?] Of all the things on your to-do list, which is the one most important to you to accomplish? I think the highest goal is transcending one's own misconceptions and coming a little closer to the truth about how things actually are. It might be that there is no end game in this goal; if that is the case then the goal really is the process itself. While you were in prison, you wrote a 700-page thesis describing your Quantum Space Theory, which you say redefines nature. Can you please describe the salient points in 100 words or so? Under the assumption that an underlying structure is responsible for the mysterious effects of quantum mechanics and general relativity, quantum space theory suggests a set of axioms about space and time that differ from those previously assumed. These axioms depict a fractal geometry for space-time. It describes a framework where inherent properties might be responsible for the physical effects we currently call mysterious. Those of us working on the theory are most excited about its potential to give us intuitive access to the mysteries of modern physics. So far, our model looks quite promising. [Read: Ingenious Flat-Earth Theory Revealed in Old Map ] Does QST successfully predict/explain all observed phenomena (such as the cosmic microwave background radiation, black holes, quantum mechanics)? With that in mind, do you consider it to be a "theory of everything"? At this point QST is in its infancy, so calling it a theory of everything is very premature. We have not yet completed a rigorous mathematical formulation of the set. Because of this, we are not yet able to determine whether or not its projections exactly correlate with nature's behaviors or just approximate them. Einstein took 11 years to complete his formulation, so we are not expecting to complete ours overnight. What we can say, at this point, is that once we adopt the axiomatic structure assumed by QST we end up with expressions in space-time that suspiciously mimic space-time curvature fields, the restrictions imposed by the Heisenberg uncertainty principle, the redshift patterns that gave birth to the notion of dark energy , and more. How could QST be verified experimentally? Once a rigorous mathematical formulation of the theory is complete, there will be many opportunities to compare its specific projections to occurrences in nature. At this stage in the effort our predictions are more general but still testable. For example: supersymmetric axiomatic sets are available according to the following function f(n) = 3^n +n, where n is a whole number and f(n) represents the number of dimensions in the set; dark matter haloes are temperature-dependent and therefore will tend to have diminishing radii as their host galaxy cools; the likelihood of quantum tunneling should decrease in a strong gravitational field; and in as much as pi (3.14159...) can be used to represent a minimum limit of space-time curvature, there is another unitless geometric number that represents the maximum limit of space-time curvature (this maximum limit is a requirement of our particular geometry). Immediate efforts are focused on proving that the value of this number is 0.3028221....