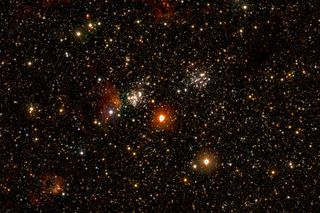 Although you can spot many colors of stars in the night sky, purple and green stars aren't seen because of the way humans perceive visible light.

Stars are a multicolored bunch. There are red giants on the verge of explosions. Big blue ones that shine in the belt of the constellation Orion and other places. And there are ordinary yellow ones like our sun that might be stable and warm enough to support life.

The color of a star is linked to its surface temperature. The hotter the star, the shorter the wavelength of light it will emit. The hottest ones are blue or blue-white, which are shorter wavelengths of light. Cooler ones are red or red-brown, which are longer wavelengths.

Stars, however, don't send out their light in one wavelength only. It's more of a range of light that's emitted: the wavelengths of light from a star "peak" in one color on a bell-shaped curve, though the star also emits other colors.

Human eyes have evolved to view yellow and green radiation, presumably because our sun emits radiation primarily in those wavelengths.

A green star is radiating right in the center of the visible light spectrum, which means it is emitting some light in all the possible colors. The star would therefore appear white — a combination of all colors. Earth's sun emits a lot of green light, but humans see it as white.

Purple stars are something the human eye won't easily see because our eyes are more sensitive to blue light. Since a star emitting purple light also sends out blue light — the two colors are next to one another on the visible light spectrum — the human eye primarily picks up the blue light.