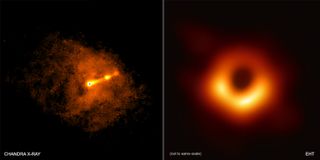 An international network of radio telescopes has produced the first-ever close-up image of a black hole's shadow, which scientists revealed this morning (April 10). The collaboration, called the Event Horizon Telescope, confirmed decades of predictions of how light would behave around these dark objects, and set the stage for a new era of black hole astronomy.

"From a scale of zero to amazing, it was amazing," said Erin Bonning, an astrophysicist and black hole researcher at Emory University who was not involved in the imaging effort.

"That said, it was what I expected," she told Live Science.

The announcement, teased for about a week and a half in advance, managed to be both incredibly exciting and almost completely devoid of surprising details or new physics. Physics didn't break down. No unexpected features of black holes were revealed. The image itself was almost a perfect match for illustrations of black holes we're used to seeing in science and pop culture. The big difference is that it's a whole lot blurrier. [9 Weird Facts About Black Holes]

There were several important questions related to black holes that remained unresolved, however, Bonning said.

How do black holes produce their enormous jets of hot, fast matter?

All supermassive black holes have the ability to chew up nearby matter, absorb most of it past their event horizons, and spit the remainder out into space at near light speed in blazing towers astrophysicists call "relativistic jets."

And the black hole at the center of Virgo A (also called Messier 87) is notorious for its impressive jets, spewing matter and radiation all over space. Its relativistic jets are so huge that they can fully escape the surrounding galaxy.

And physicists know the broad strokes of how this happens: The material accelerates to extreme speeds as it falls into the black hole's gravity well, then some of it escapes while retaining that inertia. But scientists disagree about the details of how this happens. This image and the associated papers don't yet offer any details.

Figuring that out, Bonning said, will be a matter of linking up Event Horizons Telescope observations — which cover a fairly small amount of space — with the much bigger images of relativistic jets.

While physicists don't yet have answers, she said, there's a good chance that they'll come soon — especially once the collaboration produces images of its second target: the supermassive black hole Sagittarius A* at the center of our own galaxy, which doesn't produce jets like Virgo A's. Comparing the two images, she said, might offer some clarity.

How do general relativity and quantum mechanics fit together?

Whenever physicists get together to talk about a really exciting new discovery, you can expect to hear someone suggest that it might help explain "quantum gravity."

That's because quantum gravity is the great unknown in physics. For about a century, physicists have worked using two different sets of rules: General relativity, which covers very big things like gravity, and quantum mechanics, which covers very small things. The problem is, those two rulebooks directly contradict one another. Quantum mechanics can't explain gravity, and relativity can't explain quantum behavior.

Someday, physicists hope to link the two together in a grand unified theory, likely involving some sort of quantum gravity.

And before the announcement today, there was speculation that it might include some breakthrough on the subject. (If general relativity's predictions hadn't been borne out in the image, that would have moved the ball forward.) During a news briefing from the National Science Foundation, Avery Broderick, a physicist at the University of Waterloo in Canada, and a collaborator on the project, suggested those sorts of answers might be coming.

But Bonning was skeptical of that claim. This image was entirely unsurprising from a general relativity perspective, so it offered no new physics that might close the gap between the two fields, Bonning said.

Still, it's not crazy that people hope for answers from this sort of observation, she said, because the edge of a black hole's shadow brings relativistic forces into tiny, quantum-size spaces.

"We would expect to see quantum gravity very, very close to the event horizon or very, very early in the early universe [when everything was packed into a tiny space]," she said.

But at the still-blurry resolution of Event Horizons Telescope, she said, we aren't likely to find those sorts of effects, even with planned upgrades incoming.

Were Stephen Hawking's theories as correct as Einstein's?

The physicist Stephen Hawking's greatest early-career contribution to physics was the idea of "Hawking radiation" — that black holes aren't actually black, but emit small amounts of radiation over time. The result was hugely important, because it showed that once a black hole stops growing, it will start to very slowly shrink from the energy loss.

But the Event Horizons Telescope didn't confirm or deny this theory, Bonning said, not that anyone expected it to.

Giant black holes like the one in Virgo A, she said, emit only minimal amounts of Hawking radiation compared to their overall size. While our most advanced instruments can now detect the bright lights of their event horizons, there's little chance that they will ever tease out the ultra-dim glow of a supermassive black hole's surface.

Those results, she said, will likely come from the tiniest black holes — theoretical, short-lived objects so small that you might enclose their whole event horizon in your hand. With the opportunity for up-close observations, and much more radiation available compared to their overall size, humans might eventually figure out how to produce or find one and detect its radiation.

So what did we actually learn from this image?

First, physicists learned that Einstein was right, once again. The edge of the shadow, as far as the Event Horizons Telescope can see, is a perfect circle, just as physicists in the 20th century working with Einstein's equations of general relativity predicted.

The result with more immediate, practical implications, she said, was that the image enabled scientists to precisely measure the mass of this supermassive black hole, which sits 55 million light-years away at the heart of the Virgo A galaxy. It's 6.5 billion times more massive than our sun.

That's a big deal, Bonning said, because it could change the way physicists weigh the supermassive black holes at the hearts of other, more distant or smaller galaxies.

Right now, physicists have a pretty precise measurement of the mass of the supermassive black hole at the heart of the Milky Way, Bonning said, because they can watch how its gravity moves individual stars in its neighborhood.

But those calculations are imperfect, she said.

"You have to model a very complex system," she said.

And the two methods end up producing somewhat different results in every galaxy physicists observe. But at least for the black hole in Virgo A, we now know that one method is correct.

"Our determination of 6.5 billion solar masses ends up landing right on top of the heavier mass determination from [the light coming from stars]," Sera Markoff, an astrophysicist from the University of Amsterdam and a collaborator on the project said in the news briefing.

That doesn't mean that physicists will just move wholesale to that approach for measuring black hole masses, Bonning said. But it does offer an important data point for refining future calculations.