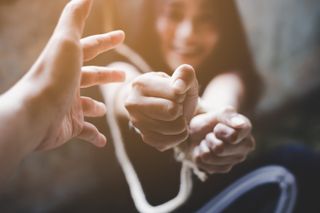 Psychiatrists use the term Stockholm syndrome to describe a set of psychological characteristics first observed in people taken hostage during a 1973 bank robbery in Stockholm. In that incident, two men held four bank employees hostage at gunpoint for six days inside a bank vault. When the standoff ended, the victims appeared to have developed positive feelings for their captors and even expressed compassion toward them.

Although it can be hard to understand how hostages would identify with, form emotional attachments to and even defend their captors after a terrifying, life-threatening ordeal, this unusual phenomenon has been known to occur on rare occasions. In addition to the syndrome's occurrence in hostage incidents, psychologists suggest that it may also affect cult members and victims of domestic abuse.

One of the most famous examples of a victim with Stockholm syndrome is Patty Hearst, a famous media heiress kidnapped in 1974. Hearst eventually helped her captors rob a bank and expressed support for their militant cause. Another high-profile example is Elizabeth Smart, a Utah teen who was kidnapped in 2002. Smart showed concern for the welfare of her abductors when police finally found her.

Although some experts disagree, most consider these cases to be clear examples of Stockholm syndrome.

Stockholm syndrome is a psychological concept used to explain certain reactions, but it's not a formal diagnosis, said Steven Norton, a forensic psychologist in Rochester, Minnesota. Stockholm syndrome isn't listed in the latest edition of the Diagnostic and Statistical Manual of Mental Disorders (DSM-5), a reference tool psychologists use to diagnose mental health and behavioral conditions. [Top 10 Mysteries of the Mind]

However, law enforcement and mental health professionals recognize that Stockholm syndrome can occur, so there's a general acceptance and awareness of the condition, Norton said.

A person with Stockholm syndrome may start to identify with or form a close connection to the people who have taken him or her hostage, Norton told Live Science. The captive may begin to sympathize with the hostage takers and may also become emotionally dependent on them, he said. That's because a victim with Stockholm syndrome may become increasingly fearful and depressed and will show a decreased ability to care for themselves. This, in turn, will make them more dependent on their captors for care, Norton said.

Victims with Stockholm syndrome exhibit two key characteristics: Positive feelings toward their captors and negative feelings, such as anger and distrust, toward law enforcement, according to a 1999 FBI law enforcement bulletin. The victim may fear that police action might threaten their safety.

According to Norton, there is no clear set of criteria used to identify whether someone has Stockholm syndrome. In addition, the symptoms could overlap with those associated with other diagnoses, such as post-traumatic stress disorder (PTSD) and "learned helplessness." In the latter phenomenon, people repeatedly exposed to stressful situations that are beyond their control lose the ability to make decisions.

It's not entirely clear why Stockholm syndrome occurs. Mental health experts have suggested it's a protective strategy and coping method for victims of emotional and physical abuse.

"It's really a form of survival," Norton said. It's a survival strategy and coping mechanism that's based on the level of fear, dependency and trauma of the situation, he said.

In their 1995 publication, Dee L. R. Graham, a psychologist and professor emerita at the University of Cincinnati, and her colleagues described that Stockholm syndrome may be more likely to occur under the following four conditions:

One possible explanation for how the syndrome develops is that, at first, the hostage takers may threaten to kill the victims, which establishes fear. But if the captors don't harm the victims, the hostages may feel gratitude for the small kindness.

Hostages also learn that, in order to survive, they must become attuned to the reactions of their captors and develop psychological traits that please those individuals, such as dependency and compliance.

Experts have speculated that it's the intensity of the traumatic incident along with a lack of physical abuse toward victims, despite the victims' fear of its occurrence, that creates a climate conducive to Stockholm syndrome, according to a 2007 FBI law enforcement bulletin. Hostage negotiators may encourage the development of the syndrome, because they believe victims may have a better chance of surviving if the hostage-takers develop some concern for their hostages' welfare.

Stockholm syndrome is a rare condition, and that may explain why the research surrounding it is so sparse, Norton said. A 1999 FBI report found that 92% of hostage victims never show signs of Stockholm syndrome.

With so few cases, it's also unclear how Stockholm syndrome affects the mental health of someone years after the traumatic incident, Norton said.