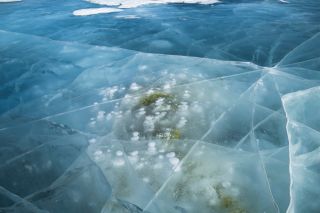 BELLEVUE, Wash. — There's a giant trove of frozen methane, or "fire ice," locked beneath our ocean's surface. If released, it could trigger tsunamis, landslides and release huge amounts of carbon into our already-warming atmosphere. But we have almost no idea how much there is or where to find it.

That's in part because frozen methane on our planet takes many more forms than we previously thought, and we are only now beginning to recognize some of them, Ann Cook, an associate professor in the School of Earth Sciences at The Ohio State University said during a presentation yesterday (June 25) here at the Astrobiology Science Conference. [8 Ways Global Warming Is Already Changing the World]

Frozen methane, also known as methane hydrates, is made up of methane gas molecules locked inside frozen water crystals. It looks like ice, forms at low temperatures and high pressures in the ocean and is thought to contain 15% to 40% of Earth's carbon, Cook said.

Because frozen methane stores much of our planet's carbon, it likely plays a big role in the recycling of carbon between our atmosphere and living things. It's also a potential energy source — and a potential biohazard, she said.

If it "melts," the sudden release of methane into the ocean rapidly changes the nearby water pressure, which can lead to dangerous landslides and tsunamis, Cook told Live Science. Methane is also highly flammable when in its free form.

Despite its importance, "we are still trying to figure out how much methane hydrate there is on Earth and how it may interact with the ocean and atmosphere," she said. "We need to understand the way it forms or how it looks in the subseafloor to know these things."

Scientists can't agree on how much methane hydrate lurks below the ocean. Most say that frozen methane contains 2,000 gigatons of carbon, while others might say closer to 200 gigatons or even 5,000 to 10,000 gigatons lie beneath the ocean, she said.

Part of the confusion stems from the fact that frozen methane takes at least five forms, according to a review that will be published in an upcoming issue of Reviews of Geophysics.

Some types are well-known, such as the frozen methane that lies below active seafloor methane vents. Other types are more surprising, like those found in thin sands— those found a couple meters below the seafloor. "We did not understand how the methane could transport to these thin sands," Cook said. But now they have a few guesses and they hope to test them by drilling in these areas and gathering samples.

What's more, learning about frozen methane on our planet can help inform us about potential methane sources on other planets, Cook said.

Frozen methane can sometimes release the gas by "belching" or venting from places on the seafloor or permafrost environments. This could also be true on Mars, Cook said. "Just last week, a relatively high methane measurement on Mars suggests we may have the same kind of system happening on Mars, which is pretty exciting," she said.

On Earth, the presence of frozen methane is still dwarfed by water and other elements. But "I can imagine really exciting planets out there where you would have hydrates forming … and then floating up in the ocean [forming] icebergs of natural gas," she said during the talk.

Editor's Note: This story was updated to note that thin sands are under the seafloor, not off the beach.