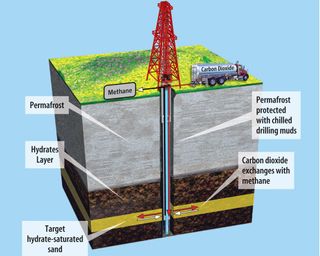 An illustration of a field trial testing technology to produce natural gas from methane hydrates in Alaska.
(Image: © Conoco Phillips)

A highly combustible form of energy locked deep in the ocean finally can be harvested using a new technique, but deploying that technique on a broad scale could spell trouble for the climate, experts say.

The solid material, called methane hydrate, is a form of the hydrocarbon methane that is locked in cages of ice called clathrates. Though billions of tons of this form of methane may be locked deep beneath the ocean floor, scientists had no safe or simple way to extract the material and convert it into a form that could be used.

But in a new demonstration, Chinese scientists say they have converted methane hydrate directly into usable natural gas on a floating platform in the South China Sea, the South China Morning Post reported.

However, even if this resource could be extracted safely, it would be bad for the climate because it would release greenhouse gases on a large scale, several experts said.

The United States has many other, more easily accessible sources of energy, including natural gas. But many countries, such as Japan and India, lack such resources.

"If they had a domestic source of natural gas, that could be a real boon," said Carolyn Ruppel, a USGS scientist who has studied the impact of methane-hydrate leaks in the ocean. "Not everyone has the resource panorama that we have here in North America."

However, accessing the power of this flammable ice has been difficult, for two reasons.

First, these reserves are often distributed over a large area rather than concentrated in one spot as oil or natural gas reserves often are. That means collecting them is like "picking strawberries in a field," Yifeng Chen, associate researcher with the Key Laboratory of Marginal Sea Geology at the Chinese Academy of Sciences in Guangzhou, told the South China Morning Post.

The bigger problem, however, is that, true to their moniker as flammable ice, methane hydrates are unstable and potentially explosive. Drilling into the seafloor could destabilize the methane ice crystals and cause explosions, spewing vast troves of methane into the atmosphere, where it is a more potent greenhouse gas than carbon dioxide (CO2), several experts told Live Science.

In 2013, Japan demonstrated a production test showing it was possible to mine such methane-hydrate resources without massive leakage. So far, however, nobody has figured out how to use the technology on a large scale. [500 'Champagne' Methane Seeps Discovered Off the Pacific Northwest Coast]

Regardless of whether the China demonstration can be scaled up, "any significantly increased use of hydrate-derived natural gas (or any other fossil fuel) would lead to continuing unabated fossil-fuel greenhouse-gas emissions — not to mention prolonged dependence on fossil fuels," said Pushker Kharecha, an Earth scientist at Columbia University who was not involved in the work.

"In order to mitigate the climate crisis, rather than harvesting more fossil fuels, we must instead scale up clean energy sources like renewables and nuclear as rapidly as possible, by as much as possible," Kharecha told Live Science in an email.

"Methane is a powerful greenhouse gas — about a factor of 30 times more potent per molecule than carbon dioxide, but [methane gases']average lifetime is only about 10 years," Kevin Trenberth, a senior scientist at the National Center for Atmospheric Research in Colorado, told Live Science in an email. "They end up being oxidized (burnt) and end up as carbon dioxide."

"Fundamentally, it [methane] is still a fossil fuel, and when you burn it for energy, you still produce CO2," Mann told Live Science in an email. "A fossil fuel, fundamentally, cannot be the solution to a problem that is caused by fossil fuels."

Still, the worst-case possibility — of vast methane leaks going straight into the atmosphere — may not be as likely as people have assumed, Ruppel said.

"Even after the Deepwater Horizon incident, which released a lot of methane in the ocean, studies showed a lot of the methane was consumed by microbes, and turned into CO2," Ruppel told Live Science, referring to the 2010 disaster involving a huge oil spill. "It's not like this methane is on a freight train to the atmosphere."

However, even if there's a safe way to extract methane from the ocean, methane is a natural gas, so it warms the climate, several experts said.

If methane displaces other, dirtier carbon-based fuels, such as coal, there is also a possibility that methane could serve as a transitional fuel before less-carbon-producing fuels expand, Ruppel said.