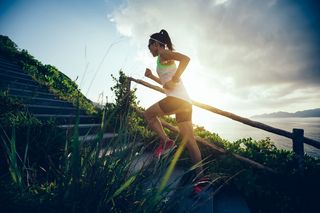 Elite athletes not only have stronger hearts and fitter muscles than the average Joe, but they also sport special gut bacteria that may actually boost their performance, a new study suggests.

The study, published today (June 24) in the journal Nature Medicine, shows that marathon runners and endurance athletes have higher levels of a bacteria called Veillonella in their guts, particularly after finishing a race, compared with sedentary people.

What's more, when the researchers isolated a strain of Veillonella from a marathon runner and administred this bacteria to mice, they found that the mice ran for 13% longer on a treadmill test, compared with mice not given Veillonella.

It appears that Veillonella feeds on lactic acid, a compound produced in the muscles during exercise; in turn, the bacteria produce a compound called propionate, which may aid athletic performance, the researchers said. [5 Most Amazing Marathon Feats]

According to the authors, it might one day be possible to give non-athletes a probiotic with Veillonella to increase their capacity for exercise. However, much more research would be needed to prove this out.

"What we envision is a probiotic supplement that people can take that will increase their ability to do meaningful exercise and therefore protect them against chronic diseases including diabetes," study co-author Aleksandar Kostic, an assistant professor of microbiology at the Joslin Diabetes Center in Boston, said in a statement.

Several of the study authors are founders of a company called FitBiomics, which aims to identify new probiotic bacteria for use in exercise performance and recovery.

Endurance and the gut

The study researchers analyzed stool samples from 15 people who ran the Boston Marathon in 2015 and compared them with samples from 10 sedentary people.

They found that, while levels of Veillonella were virtually non-existent in samples from sedentary people, they spiked in marathon runners shortly after the race.

A second analysis of 87 ultra-marathoners — those who run races longer than a marathon's 26.2 miles (42.2 kilometers) and Olympic-trial rowers — showed a similar result: Levels of Veillonella significantly increased after endurance exercise.

Veillonella appears to be relatively unique among gut bacteria in that it uses lactate or lactic acid as its sole carbon fuel source, Kostic said.

Studies in mice showed that, indeed, lactic acid from the blood can cross over into the intestines, where Veillonella uses it as a food source and subsequently generates propionate.

The researchers hypothesize that athletes and Veillonella have a "symbiotic" relationship: The higher levels of lactic acid in athletes' guts favor the growth of Veillonella, and these bacteria in turn produce a compound that aids in performance.

"The results are fascinating," said Dr. Emeran Mayer, a gastroenterologist at the David Geffen School of Medicine at UCLA and author of "The Mind-Gut Connection" (Harper Wave, 2016), who wasn't involved in the study. [Don't Be Fooled: 5 Probiotics Myths]

If the findings are reproduced with additional human studies, they could have implications for treating people involved with high-intensity physical activity, such as athletes or people in the military, Mayer said.

Still, Mayer said it's hard to predict whether a Veillonella probiotic could increase a person's capacity for exercise. It may be that some people develop higher levels of Veillonella in their guts early in life, and that these people are more likely to become athletes, he said.

In addition, it's unclear if a probiotic could increase levels of Veillonella in the gut of non-athletes; and even if possible, it could have unwanted side effects, he added. Still, "It is certainly an exciting possibility," Mayer said.