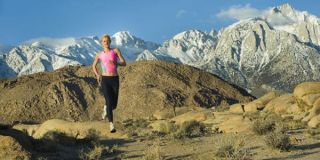 Runners training for the New York City marathon are likely gulping down carbohydrates before the big race in hopes of improving their performance and endurance.

And these trained athletes know what they're doing. Carbohydrates are sugar-based molecules, and the body can use some of them to produce glucose. Glucose becomes stored in the liver and muscles as glycogen, molecules that function as long-term energy storage that can be tapped into when needed (such as during a lengthy run).

The amount of carbohydrates consumed corresponds with how much glycogen is stored in the body. Translation for marathoners: Stock up on the carbs so you can make it to the finish line.

Eating carbohydrates prior to a race improves a runner's endurance , speed, energy and alertness, according to Asker Jeukendrup, a professor of exercise metabolism and academic director of the Human Performance Laboratory at the University of Birmingham in the United Kingdom.

Before, during and after

Consuming carbohydrates can also improve performance if ingested before, during or after a workout session. For example, eating carbohydrates before exercise will give a person a boost in glycogen stored in their muscles , enabling them to work out for longer.

Eating carbohydrates while they exercise will provide them with a supply of glucose in their blood, which will serve as extra fuel and give them additional energy . Even eating carbohydrates after a workout is beneficial, as it has been shown to restore glycogen levels that were depleted during a workout and help muscles better recover.

In fact, a study published in the February 2004 edition of the Journal of Applied Physiology suggested post-workout carbohydrate intake contributes to muscle preservation and strengthening. Researchers from the University of Texas Medical Branch in Galveston, Texas, found that eating 100 grams of carbohydrates after strength training improved the condition and retention of muscle mass.

During prolonged bouts of exercise, such as the 26.2-mile-long (42.16 km) New York City marathon, carbohydrates act as the main source of fuel. Since the body's storage supply of carbohydrates is small and not enough to last a full marathon, it is important to "start with a full tank" by making sure that the energy storage is at its highest at the start of the event, and then "top off" during the race, according to Jeukendrup.

"This way, you provide sufficient high energy fuel during the event," Jeukendrup said. "Without these fuels you would still be able to continue, but you would start to use more and more fat as a fuel . Even a lean person has plenty of fat, but the problem is that it is a slower fuel and does not provide the same amount of energy per unit of time [as] carbohydrate."

Just how much carbohydrates should a training runner load up on before the big day?

"I would recommend eating a very high carbohydrate diet the days leading up to a marathon," Jeukendrup advised. "A bowl of pasta may not cut it. The recommendation is to have at least seven grams of carbohydrates per kilograms of bodyweight in the days before. This can come from pasta, bread, rice, potatoes and other carbohydrate sources."