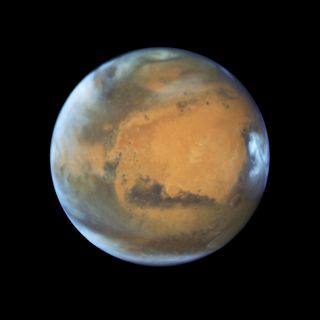 Icy blue clouds swirl over the Martian mountain Syrtis Major (far right) in this Hubble telescope portrait of the Red Planet. According to a new study, the blue clouds of Mars may form as the result of tiny meteorite impacts in the planet’s atmosphere.
(Image: © NASA Goddard)

Look up from the Red Planet on the right morning, and you might see a blue sky. All year round, wispy blue clouds of ice form in the Martian atmosphere, hovering between 18 and 37 miles (30 and 60 kilometers) above the planet's surface. There, they streak across the sky like the feathery cirrus clouds we see so often on Earth.

Decades after rovers like the Mars Pathfinder snapped the first pics of these alien clouds, astronomers still struggle to explain them. To form a cloud, airborne ice or water molecules need something solid to condense onto — a fleck of sea salt, maybe, or some stray dust tossed up on the wind. Scientists long assumed that bits of surface dust lofted into the Martian atmosphere might be the source of the planet's icy blue clouds. But a new study published today (June 17) in the journal Nature Geoscience argued that this might not be the case.

The hypothesis goes like this: Every day, 2 to 3 tons of screeching space rocks slam into the Martian atmosphere and break apart. All those midair collisions leave a lot of dust — or "meteoric smoke," as the study authors call it — hanging around the Martian sky. And that dust might just be enough to turn trace amounts of water vapor in the atmosphere into fragile, icy clouds.

The team's work also showed that the meteor clouds of Mars had a noticeable effect on the planet's climate. At certain times of year, ice clouds in the Martian sky increased temperatures by up to 18 degrees Fahrenheit (10 degrees Celsius) in the upper atmosphere, the model predicted. If that's the case, tiny flecks of dust from other worlds may profoundly affect weather on Mars and even our own planet.

"We're used to thinking of Earth, Mars and other bodies as these really self-contained planets that determine their own climates," lead study author Victoria Hartwick, a graduate student in the University of Colorado's Department of Atmospheric and Ocean Sciences, said in a statement. "But climate isn't independent of the surrounding solar system."